This report, commissioned by Catch 22, attempts to measure and value how greater coherence and responsiveness in young people’s services would contribute to potentially better outcomes for young people and society.

Currently, public services do not deal effectively with this life stage. At the ages of 16, 17 and 18 many of the better targeted and coordinated services for children fall away, often leaving young people who lack support from their families both vulnerable and struggling.

An estimated 200,000 young people find themselves locked into destructive cycles, with long-term consequences for their economic, physical and emotional wellbeing and substantial costs for the state as a result of their ill-health and their dependence on welfare.

In light of this, Catch22 launched the Ready or Not campaign in 2010, calling for a radical overhaul in our approach to young adulthood, through formally recognising this transition period as a life stage and making services more coherent and accessible for the 16 – 25 age group.

SROI allows researchers to place monetary values on outcomes that are less tangible, such as increased confidence, while still including more conventional cost savings to the state, such as reduced spending on social benefits. Capturing a broader range of value produces a truer picture of the wider costs and benefits of adopting new policies.

In accordance with key principles of SROI, this study relied heavily on information from interviews with stakeholders from the following groups:

The information from interviews helps identify what sorts of changes would bring about positive change for young people themselves, and the economic and social outcomes that would result from those changes.

NEF calculated monetary values for the suggested inputs and outcomes for the three key stakeholder groups whom interviewees felt had the most to gain from an overhaul in services for 16 – 25 year olds:

There are three groups of findings.

1. The costs of doing nothing
The current cost of the poor outcomes for young people is high. Recent estimates suggest that youth unemployment costs the exchequer £8.1 billion a year; the cost of crime is an additional £1 billion each year. These are not just costs that have to be met today. Lost economic productivity and increasing reliance on the welfare state mean that there will also be costs into the future.

2. What needs to change
In our interviews, young people and practitioners consistently told us that the key to achieving better outcomes for young people was more personalised support. Young people spoke of needing someone they could go to for advice and emotional support, not unlike the role a parent might play. Practitioners emphasised that with such support young people can turn around their lives in significant ways. Previous research on the subject supports these points.

Lack of coherence between different services has also resulted in delays to treatment, frustration among young people and overlap in services. The current context of public spending cuts makes tackling such inefficiencies even more important – it is timely to redesign services both to better meet demand and to cut out waste.

3. The value of change
By giving young people with complex needs the support they need, it would be possible to improve their life chances, i.e. reduce their negative outcomes. If by supporting them, the amount that these young people cost society was no more than the cost of an ​‘average’ 16 – 25 year old, then the potential value generated for the young people themselves, for young parents and their children, and for the state, would be £3.2 billion. Of this: 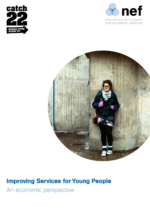