This report was written for Co-operatives Fortnight 2011 to explore pay inequality in the workplace, and look at the social and economic damage it causes. It also makes recommendations for how we can begin to change the counterproductive culture of high differentials in pay.

This report covers the issue of the widening gap between pay at the top and bottom of corporations, the effect that has on society and the economy, and the effect it has on the companies concerned.

In particular it covers how the ratio between the bottom and the top might be used in order to bring more pressure to bear, both moral and practical, on the problem.

One of the central concerns of the co-operative movement is to distribute more evenly the benefits of economic activity. Their relative success during the recent banking crisis and ensuing economic recession is testimony to the greater resilience of more fair and equal models of corporate governance. But, whilst the co-operative sector is enjoying a renaissance, a greater creeping inequality continues to spread more widely in the corporate sector, bringing with it a range of economic and social costs, and dysfunction. This report suggests how we might begin to reverse that tide.

The publication of the crucial ratio between lowest and highest paid in every public company would encourage debate about pay and corporate responsibility. It would, we believe, kickstart a more informed debate about what kind of pay gap is acceptable and what is simply divisive and inflationary. It would also have a healthy effect on both fairness and equity in the UK, and on the companies themselves. One of the more surprising revelations, shocking even, is the absence of any evidence to support and justify high pay ratios, compared to the large body of evidence concerning the costs of inequality. We believe that the burden of proof should shift, so that companies operating a ratio above 1:20, or even 1:10 (this is the debate we need to have), would need to show how the economic and social benefits of doing so outweighed the costs.

Our recommendation is that every public company should be required to reveal this, and also companies seeking government contracts which are over a certain size. The sooner we can make this happen, the sooner it will start drawing investors’ attention to what are the most important and relevant aspects of corporate pay. While disclosure of size of CEO salaries, as happens now, may simply tempt remuneration committees into greater levels of excess, disclosure of the ratio can potentially shame or guide the corporate world into more equitable arrangements – or to explain why they are genuine exceptions.

By itself, any fixed pay ratio risks a kind of tokenism. Single metrics do not create change by themselves. It makes sense, therefore, to include the ratio in a Charter of Responsible Pay which can be endorsed by investors and employers organisations, and will need to be drafted partly by them – because it will be pressure from investors that will force companies to sign up to the precepts of the charter. We need to encourage a situation whereby companies that do not sign up are asked difficult questions by investors about why they have not.

The charter might include a maximum acceptable bottom-to-top pay, aware that there may be reasonable exceptions to this, but which can be explained by the companies and organisations
themselves. It could also include: 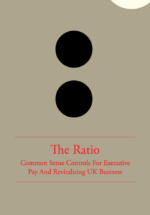