Why are a growing number of non-graduates are working in low-paid, dead-end jobs?

When it comes to jobs, quality matters as well as quantity. And a growing number of non-graduates are working in low-paid, dead-end jobs.

By adopting a sector-specific approach we highlight where the good jobs for non-graduates can be found and how we can encourage more to be created.

Non-graduates make up more than one half of the workforce and are more than twice as likely to be unemployed as graduates. However, the problem is not only the quantity, but also the quality of jobs available to them.

In the past three decades the UK has witnessed a growth in the proportion of precarious low-paid jobs on the one hand and high-paid graduate jobs on the other. The result has been growing in-work poverty and economic inequality.

The traditional policy response to this ​‘hour-glass’ labour market has been to try and up-skill the population, pushing as many people as possible into the top half of the glass. This is valuable but it is not enough.

To reshape the debate our research takes a fresh look at the data. We analyse the jobs available to non-graduates by sector to find out where the good jobs for non-graduates can be found now and where they may come from in future.

We need a jobs strategy that renovates the bad and promotes the good jobs in the economy. We argue for a sector-specific approach, developed in collaboration with businesses, employees, trade unions and educational institutions. 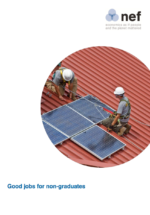