Cutting it in Birmingham

Why the grass roots aren’t growing any more

The findings of research investigating perceptions of the impact of the cuts on small and medium sized third sector organisations in Birmingham.

This short paper from NEF is based on a consultative workshop held in February 2012, and four in-depth interviews with members of the Habits of Solidarity network. The findings presented below contribute to NEF’S wider research on the effects of the New Austerity and the Big Society.

The findings from the research show the depth of turmoil that exists within the third sector at present and the impact that the cuts have had on the capacity of the sector. They pose some critical questions about the Government’s public spending cuts and parallel efforts to build a ​‘Big Society’.

The participants involved in this short study represent a diverse mix of small to medium community organisations. They were unified in their concerns about how the third sector, and local communities and people, will fare through the cuts.

The evidence in this report suggests that small local organisations are being overwhelmed by a combination of increasing demand for their services and decreasing funding. This confirms a general view in the sector that, while national policy-makers speak of a more prominent role for civil society, locally based charities are facing a perfect storm. There appear to be few opportunities for these organisations to support positive change, and many fear that they risk losing their focus – or experiencing ‘’strategic drift’’ as they chase ever-decreasing pots of funding in an ever more competitive environment. 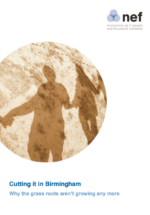