Towards a new social settlement, fit for the 21st century

The Beveridge report was designed to deal with extreme social conditions. Time has moved on, but the challenges we face are no less urgent.

To develop a new social settlement that is fit for the 21st century, we must combine the strengths of the post war model with new perspectives and priorities. In this short briefing, we set out five goals for a new social settlement, and put forward eight steps that should be taken to make our welfare state more socially just and sustainable.

The Beveridge Report was designed to deal with extreme social and economic conditions. Beveridge called it ​‘a time for revolutions, not for patching’.1 Seven decades later, we face an entirely new set of problems. We might call them the ​‘five giants’ of the post-Beveridge era. Not the ravages of war or even the combined scourge of ​‘want, disease, ignorance, squalor and idleness’ (which were Beveridge’s ​‘giants’), but dramatically widening inequalities, catastrophic threats to the natural environment, a dysfunctional economy, a moribund democracy and a dangerous erosion of social solidarity.

Unlike Beveridge’s ​‘giants’, which put the spotlight on problems experienced by individuals, today’s ​‘giants’ focus on problems that are shared. They afflict everyone, across generations and social groups. The poorest and weakest usually suffer first and most, but one way or another they blight the lives of all.

To develop a new social settlement that is fit for the 21st century, we must combine the strengths of the post-war model with new perspectives and priorities, set out below. The aim of this document is not to specify a new plan in detail, but to map out the direction of travel. nef is preparing a more detailed analysis, to be published in 2013.

Goals for a new social settlement

To tackle the 21st century ​‘giants’ we need a new social settlement, which will: 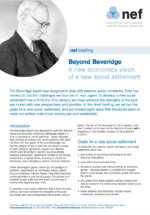