The welfare state no longer provides an adequate safety net. Many people are struggling just to meet their basic needs. Precarious employment is rising, and in-work poverty has overtaken out-of-work poverty for the first time.

Public spending cuts are giving rise to more needs and greater demands on the welfare state. Austerity measures have thwarted the best ambitions of the government’s plan to build a ​‘Big Society’. But people can use local assets and resources to try to tackle these problems.

In 2010, the Coalition Government began trying to reduce the national deficit through public spending cuts and welfare reform. This – along with the effects of the recession – became the ​‘new austerity’. It was linked with a new political programme to build a Big Society by promoting local social action.

Two years ago, nef (the new economics foundation) set out to explore how people in two of the most economically deprived parts of Birmingham and Haringey, North London, were experiencing these changes. Through peer research, photojournalism, interviews and workshops with local residents, community organisations and local authority officers, we asked:

1. Living with the new austerity

The burden of reducing Britain’s deficit is falling predominantly on those who get vital support from public services and welfare: the unemployed, low-income earners, the very elderly, the young, and the disabled. As part of this research we interviewed a diverse range of local people: they all shared experiences of everyday insecurity, an unravelling safety net, precarious employment, and growing demands for unpaid labour.

Everyday insecurity: People’s lives are made increasingly insecure by the rising cost of living; unemployment and/​or precarious, part-time and poorly paid employment; changes to social security; and debt. There are mounting pressures to afford basic necessities such as food, utility bills, and rent, which often contribute to – and are compounded by – insecure relationships with family and friends, and mental and physical ill-health. People feel they are losing control over their lives – with scarcity of money and time closing down their options. They feel powerless in the face of change and have little hope for a future they cannot control.

An unravelling safety net: Benefits and tax credits are becoming less generous, more conditional, and increasingly punitive. The divisive rhetoric of ​‘strivers versus skivers’ demonises people who are unable to work through no fault of their own. There are growing risks of food and fuel poverty, homelessness, and indebtedness. Services which could help meet these needs, such as social care, child care, youth services, housing services, and legal advice, are all being restructured and reduced. Services aimed at preventing needs arising or getting worse, are being cut back, piling up problems for the future.

Precarious employment: Our research reveals a growing prevalence of precarious working conditions, zero-hours and temporary contracts, underemployment, and very low wages. Jobs like this push people into in-work poverty. Many are caught in a ​‘low pay, no pay’ cycle, oscillating between short spells of poorly paid employment and unemployment. Low wages have helped employers to keep employees in work but more people are now involuntarily underemployed than before the recession.

Growing demands for unpaid labour: Cuts to public services and tax credits are placing an impossible burden on people who have to step in and look after family members while doing paid work. As demand for care rises, a growing strain is placed on unpaid human resources and relationships. Women are most often left to pick up the pieces. For many, this added burden brings emotional stress, decreased well-being, and loss of earnings.

2. What happened to the Big Society?

The Big Society vision of empowered local communities driving forward an agenda of social action and local ownership of public services has faced major challenges. Many in the voluntary and community sector (VCS) viewed it as window dressing for a programme of cuts that had already thrown them into turmoil. As people have become less economically secure, they have tended to turn inwards, focusing on just getting by from day to day, with no time or energy to connect with others or take local action.

This has led to a general weakening of the core economy – a term used to describe all the unpaid time, caring, support, friendship, expertise, giving, and learning that underpin society and the formal economy. The Big Society vision relied on a strong core economy. But people have found their time and capacity increasingly stretched by reduced local public services, changes to working and child tax credits, and insecure, low-paid employment.

The Big Society project depended on people having disposable time and other assets, which have never been equally available to all. The new austerity has widened inequalities. Those who are poor and powerless have less time and fewer resources at their disposal. This makes it much harder to get involved in local activities, to take over local assets at risk of closure, or bid to run services, or develop neighbourhood plans. The Big Society has gradually disappeared from public and political discussion.

3. Promoting social justice in an age of austerity 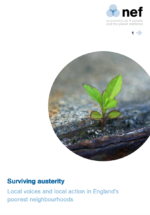