Every day, major economic decisions are made based on advice no more accurate than a coin flip. But when it comes to climate change, sceptics and media are fuelling distrust in forecasts that now have a 20-year track record of accuracy. It’s time to end the double standard in how our most important decisions are made.

Uncertainty is the new denial

“Not only is much of the science behind the idea of global warming now being disputed, but, at a time of such widespread economic hardship, we simply cannot afford to misdirect scarce economic resources on such a massive scale.” Dr Benny Peiser, Director of the sceptic Global Warming Policy Foundation writing in the Daily Mail

This emphasis on uncertainty has a negative impact on climate progress. It slows down environmental policy and corrodes public will to act. Research, especially in the field of psychology, notes that uncertainty is one of the most serious barriers to action on climate change.

Climate forecasts: The scapegoat for Uncertainty

“[A]ccording to increasing numbers of serious climate scientists, it does suggest that the computer models that have for years been predicting imminent doom, such as those used by the Met Office and the UN Intergovernmental Panel on Climate Change, are flawed, and that the climate is far more complex than the models assert.” Climate sceptic David Rose writing in the Daily Mail

Supporting the uncertainty argument is the claim that climate change forecasts are inaccurate or flawed. Particular hostility is aimed at the Intergovernmental Panel on Climate Change (IPCC). Drawing together the work of thousands of scientists from over 120 countries, the IPCC’s forecasts are internationally accepted as the most comprehensive and authoritative climate predictions available. Yet last year, Telegraph headlines about the IPCC included: ​‘IPCC report is ​“full of hocus pocus science”’; ​‘Top climate scientists admit global warming forecasts were wrong’; and, ​‘Climate change: this is not science – it’s mumbo jumbo’. The suspicion extends to politics, too. Maurice Newman, the most senior business advisor to Australian Prime Minister Tony Abbott, has accused the IPCC of ​‘dishonesty and deceit’ and labelled climate change predictions a ​‘scientific delusion’.

The allegations are serious: the more people hear about climate forecasts being defunct, the less likely they are to support the drive to keep global temperatures below safe levels. They also stand in stark contrast to the certainty the scientific community has expressed in the main issues relating to climate change. The release of the IPCC’s 5th Assessment Report comes with a revised estimate of certainty – up to 95% – that humans have been the main cause of global warming from 1950 to present. This 95% has a precise scientific meaning. It is higher than the certainty that vitamins are good for your health and equivalent to the certainty that cigarettes cause lung cancer.

This paper seeks to reconcile these differences by comparing climate forecast estimates to the actual measured data for the same time period. It investigates the notions regularly aired by politicians and media that (a) global warming forecasts are inaccurate, and (b) they are too inaccurate to inform major policy decisions.

The effects of climate change can only be viewed over a long time frame. With over two decades of global climate observation data since the IPCC published its first report in 1990, we are only now in the position to begin assessing their track record for accuracy. Since 1990, the IPCC has published forecasts with increasing complexity and detail but with little change to many key measures like predicted climate sensitivity (what doubling the CO2 concentration means for global temperature). By comparing its early forecasts to the actual climate observation data recorded over the past 20 years, we can start to build a picture of how accurate it has been so far. 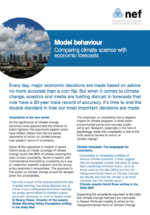