A review of the impacts of NHS reforms in England

The NHS is rated more highly than any other comparable healthcare system in the world. But it is often thought to be beset by crises and in danger of falling into decline. Market-based reforms have been presented as ​“solutions” to a continuing ​“problem” of an under-performing public institution. Does the evidence support these changes?

Market-based reforms began in the 1980s, when support services were first contracted out, and continued in the 1990s, with the creation of an internal market for clinical services.

In the 2000s, patients were allowed to choose where they received some treatments; prices were attached to units of completed healthcare; the first privately owned centres were established to take on NHS business; some hospitals became independent foundation trusts; and private companies built most new hospitals, recovering their investment by renting them back to the NHS for 30 years or more.

From 2010, under the Coalition government, the speed of change intensified. The health budget was drastically constrained, leaving the NHS in a mounting financial crisis with shrinking resources to meet expanding volumes of need. The Health and Social Care Act introduced the biggest set of changes ever imposed on the NHS. It removed from government the primary responsibility for providing healthcare, established open competition as the new norm, and aimed to turn all NHS trusts into foundation trusts, independent of government control.

While there is now a ​“level playing field” between sectors, large commercial organisations have advantages in the new NHS marketplace and are winning more contracts. The Transatlantic Trade and Investment Partnership (TTIP), due for completion in 2015, will remove trade barriers between the European Union and the US. Unless the NHS is excluded from TTIP, any future government trying to return privatised health services to public hands will risk severe financial penalties.

Another big shake-up is on the way. Many critics say the NHS has suffered more from constant reorganisation, which is costly, wasteful and distracting, than from anything else.

The claim that increased competition can improve both efficiency and quality of care is a central justification of market-based reforms and the Health and Social Care Act. Yet we could find no sound evidence to support it. Academic studies, including systematic reviews on both sides of the Atlantic, find the effects of market mechanisms and privatisation in healthcare systems have largely inconclusive or negative effects on quality and equity in healthcare. International comparative studies of healthcare systems have given high rankings to the UK and low rankings to the US.

There is no conclusive evidence that patient choice has made UK health services more responsive to patients or more competitive. The Private Finance Initiative has inflicted dangerously heavy long-term financial obligations on the NHS with no compensating savings or benefits. Independent sector treatment centres have been found to ​‘cherry pick’ straightforward cases, take payments for treatments not delivered and to have damaging impacts on the NHS.

What else could justify the changes?

Successive governments have claimed the policies they are promoting are not ideological but based on evidence. As we could find no sound evidence to support market-based reforms, we looked for other ways to justify the changes.

Could the NHS benefit from the expertise of commercial organisations, such as those in the United States? Evidence suggests the poor performance of US healthcare is directly attributable to reliance on market mechanisms.

Is healthcare a suitable case for market treatment? Markets rely on perfect information being available, but this is rarely the case for patients. In fact, the NHS was created because markets failed to provide adequate healthcare. Competition can also undermine professional ethics and cannot respond adequately to most chronic conditions. Against this background there are no grounds for allowing public resources intended for healthcare to be turned into shareholder dividends.

Can healthcare markets be managed effectively? An open competitive healthcare market makes regulation extremely complicated. Neither Monitor nor the Care Quality Commission has yet proved itself fully up to the job. Tariffs for completed episodes of care have been manipulated to improve results for providers rather than for patients.

Can market mechanisms help to prevent ill health? Market-based reforms focus on treatment and cure, rather than prevention, and so far have done nothing to shift investment or action ​“upstream” to stop people needing healthcare. A healthy patient is not a source of income.

How much has all this cost?

The recurring costs of market mechanisms in the NHS have been conservatively estimated at £4.5bn a year. This could pay for 10 specialist hospitals, 174,798 extra nurses, 42,413 extra GPs or 39,473,684 extra patient visits to A&E. If, as the evidence suggests, market reforms damage the capacity of the NHS to provide high-quality care, the people most likely to suffer are those who use the NHS most frequently: women and older people.

The drive to turn the NHS into a competitive marketplace flies in the face of evidence showing that markets in healthcare almost invariably fail taxpayers, citizens and patients. If policy makers continue in this direction, it will be on ideological grounds. If instead they applied the lessons learned so far, they would change course to enable the NHS to build on its strengths and evolve and flourish in public hands, for the benefit of us all. 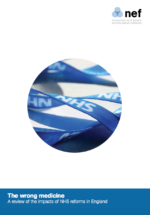 With millions struggling to afford life's essentials, here's how the chancellor can make a real difference on Wednesday

The cost of public debt is lower than it's been for pretty much three centuries – not that you'd know it from the media coverage.