How groups across the UK are adapting, challenging and imagining alternatives in the face of austerity

Austerity policies have put communities and organisations across the UK under intense pressure.

While the negative social consequences are well documented, less attention has been paid to the range of creative responses to austerity measures from local authorities, housing associations, grant-makers and funders, charitable and voluntary sector, campaigners and activists.

In previous research, NEF has outlined the social impact of austerity policies, particularly in already vulnerable communities. This report builds on such work by mapping out the range of strategies that communities throughout the UK are utilising to maintain and promote social justice, despite swingeing cuts to public funds.

We show how different groups across the UK are seeking to adapt (by making austerity more liveable or workable), challenge (by speaking out against austerity) and imagine (by becoming advocates of alternatives and wider structural change).

The creative responses we identify are not simply aimed at organisations’ survival, but at reconfiguring operations to maintain or even expand their impact.

Adapting to austerity, innovative local authorities have taken creative approaches to public spending which foster local economies, and have tried to make the most of existing assets rather than selling them off. They have sought to identify and attract funding from new sources to replace reduced budgets. By integrating services and local assets, service delivery organisations can pool resources and mobilise community capacity to maintain, or expand, activities.

Charities, housing associations and community groups have supported local people as they adapt to benefit cuts by providing legal advice, employment support and investing in projects which help reduce the cost of living for people on low incomes. Such initiatives seek to support people to meet their basic needs, such as nutrition and energy. Some local authorities have tried to improve circumstances for the worst off: by reallocating funding to invest in initiatives such as free school meals, educational maintenance allowance and the development of credit unions.

Challenges to austerity have been made on several fronts by local authorities, charities, campaigners and activists. Some have used research and evidence to show the negative effects of austerity on people’s lives and local labour markets. Others have challenged private businesses – from landlords to payday lenders that have taken advantage of the desperation of people living on low wages – by deploying both collaborative and adversarial approaches to change business practices.

Direct challenges to government on austerity policy were initially rare but have recently become more common, as both the human cost of austerity and the failure to reduce the budget deficit became clear. Challenges are being made on the basis of moral, legal and practical arguments – contesting policies and budget decisions. Anti-austerity activism seeks to change or influence government policy and its impact by challenging it in the courts, or through campaigning and direct action.

A smaller group of charities, campaigners and academics are also challenging the narrative of austerity: working to undermine the justifications for austerity given by government on the necessity, efficacy and fairness of austerity. Much academic work challenges the argument that the crisis was caused by profligate public spending and ​‘living beyond our means’, as well as the notion that austerity is the road to economic recovery. Charities are often involved in challenging anti-welfare rhetoric, by evidencing the social value of welfare; and in exposing the ​‘shared sacrifices’ myth of austerity, by demonstrating that economic elites continue to prosper whilst the most disadvantaged suffer.

Imagining has taken a handful of local authorities, charities, campaigners and grant-makers beyond the immediate term to think about ways of organising politics, the economy and public services beyond the current era of austerity. Imagining has involved coming up with alternative ideas and policies, while also implementing some of these approaches on a small scale in order to show that they are viable. People involved in imagining tend to accept that old systems had faults even before austerity and want to change more than just levels of government spending.

Proposals include concentrating activities on local economic development through local authorities; the creation of a more collaborative welfare state; making strategic social and economic investments in new industries to meet new demand; and developing a system which prevents harm ​‘upstream’ to promote wellbeing for all.

There is evidence that the capacity for adaptation to austerity for many institutions is reaching its limits. In response to this impending tipping point, organisations can be expected to speak out against austerity in greater numbers, so that the challenge to austerity will become clearer, stronger and more widespread. We anticipate that this will lead to further work in the ​‘imagining’ domain: continuing the work of alternative macroeconomic policies; imagining more preventative and democratic models of welfare and governance; and trying these out in practice on a local level. 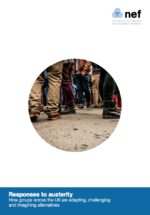