The 2008 crisis underlined a series of weaknesses in the global financial system. Efforts to redesign and regulate the system must focus on ensuring resilience – the system’s ability to continue to serve the economy well in the face of shocks that unfold suddenly from within, as in 2008, and also gradually emerging strains on the system, such as climate change.

While policymakers and regulators do talk about resilience, it is not always clear what they mean. Often it is implicitly assumed that, by making individual banks hold more capital, we can stop them from ever going bust – ​‘resilient’ banks will equal a resilient system. This is a dangerous assumption; it also ignores our growing understanding that complex systems are about much more than the sum of their individual parts.

Drawing on academic and policy literature and a series of expert interviews and roundtables, we find seven key factors that influence system resilience and that can be measured:

We compiled numerical indicators for each of these factors to compare different countries’ financial systems, and whether they had become more or less resilient over time. This analysis finds that the UK economy has low levels of financial system resilience, significantly trailing other leading industrial economies, including Japan, Germany, France, Italy, and Canada.

Although the UK’s financial system resilience has improved slightly since the financial crisis, it remains the worst in terms of diversity, interconnectedness, financial system size, asset composition and complexity, and transparency. This has worrying implications for the UK’s economic stability.

Since the financial crisis, governments have focused on increasing competition between commercial banks and requiring banks to hold more capital. Our analysis finds that these may have limited effects on overall financial system resilience. Specific policy implications of the analysis include:

We recommend that regulatory bodies:

It is vital that policymakers develop a more sophisticated understanding of resilience and use it to help reshape our financial system. Unless this is achieved, our economy and society remain at risk of a future financial crisis. 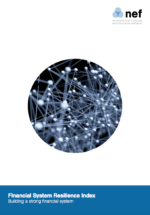