The fishing industry received an unexpected gift in late 2014 as oil prices were cut in half over the course of six months. Now two years on, oil prices still remain low, and recent data suggests that this major cost reduction has led to record profits in the fishing industry. At the same time, European fisheries are struggling to reduce fishing pressure to meet the Common Fisheries Policy’s key objective of ending overfishing by 2015 where possible and by 2020 at the latest. Rather than treating lower fishing costs as a simple windfall gain, this opportunity could be used to make a final push to end overfishing in Europe and achieve long-term sustainability with no significant hit to economic viability in the short-term.

A major cost reduction has led to record profits

Marine fishing is an extremely fuel-intensive industry. While there is variance by fishing method and species, it takes approximately half a litre of fuel to produce one kilogram of fish. In EU fisheries, energy costs form a quarter of total production costs – a percentage even higher than energy-intensive industries like steel and paper.

Preliminary data and modelling for the Annual Economic Report of the EU Fishing Fleet shows that the plummeting oil price has coincided with record profits and profit margins. While profit margins vary significantly between large and small-scale fleets, the average profit margin is higher than many other industries, which is to be expected as entry into the fishing industry is heavily restricted.

Fuel prices and profit margins for the EU fishing fleet 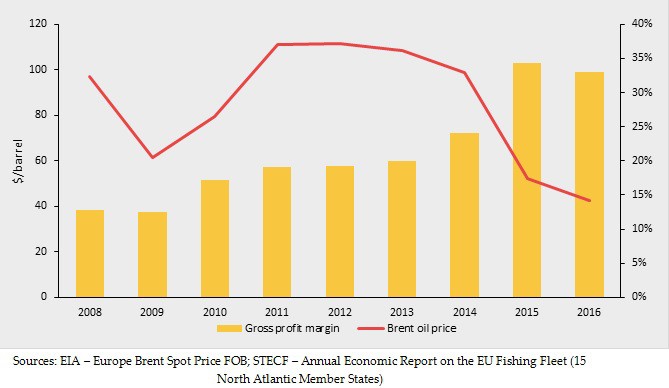 This economic picture is extremely important in the context of the EU Common Fisheries Policy’s objective of ending overfishing. The annual process of setting Total Allowable Catches is often pitted as long-term sustainability against short-term economic pain, but the current economic picture, especially due to low fuel prices, shows that this trade-off is severely overstated. It is precisely now, during a time of windfall profits, that a reduction in annual quotas can be absorbed by the fleet while still enabling them to operate profitably. In fact, absent appropriate fishing quotas and low oil prices could make overfishing worse as more fishing trips at the margins of the fishing season would become profitable.

Even outside of fuel prices the economics of fishing point towards investing in fish stock recovery. Research has also shown that the recovery of fish stocks in Europe is also linked to the recent increase in profits. Bio-economic modelling has shown the potential gains in ending overfishing and that there is a greater net economic benefit the faster the transition.

Act now in the face of an uncertain future

Low fuel prices and the associated windfall profits may only be temporary, although the driving factors of a supply glut, lower extraction costs, and weak global economic growth look set to continue in the near future – even with ​‘drastic’ action taken by OPEC to raise prices in the range of 5 – 10%. Similarly, while many fish stocks are now growing in size, progress is uneven and the biology often unpredictable.