Landing the blame: overfishing in the Baltic 2018

Which member states are setting quotas above scientific advice? 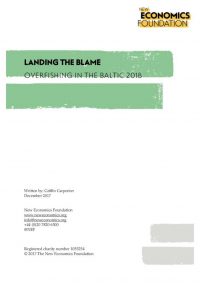 Fisheries ministers risk damaging our natural resources beyond repair by consistently setting fishing limits above scientific advice. This is our third year running a series of briefings to identify which member states are standing in the way of more fish, more profits, and more jobs for European citizens.

Food for an additional 89 million EU citizens. An extra €1.6 billion in annual revenue. Over 20,000 new jobs across the continent. Far from being a pipe dream, all of this could be a reality if we paid more attention to one of Europe’s most significant natural resources – our seas. If EU waters were properly managed – with damaged fish stocks rebuilt above levels that could support their maximum sustainable yield (MSY) – we could enjoy their full potential within a generation.

Every year, fisheries ministers have an opportunity to make this a reality when they agree on a Total Allowable Catch (TAC) for commercial fish stocks. Scientific bodies, predominantly the International Council for the Exploration of the Sea, provide information about the state of most stocks and recommend maximum catch levels. But for many years, this scientific advice has not been respected.

The reformed Common Fisheries Policy (CFP) that entered into force in 2014 aims to restore and maintain populations of fish stocks above levels capable of supporting the MSY. The corresponding exploitation rate was to be achieved by 2015 where possible and by 2020 at the latest for all stocks. Following scientific advice is essential if we are to achieve this goal, end overfishing, and restore fish stocks to healthy levels.

The negotiations over TACs are not public, only their outcomes. This lack of transparency means that ministers are not on the hook when they ignore scientific advice and give priority to short-term interests that risk the health of fish stocks. These negotiations and the evidence used to reach conclusions about TACs should be made publically available for all stakeholders. This is the only way for civil society to properly hold their representatives to account.