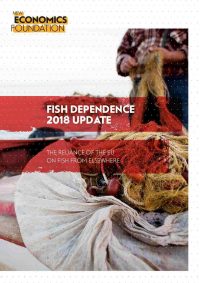 This overexploitation means that fish stocks are less productive than if they were allowed to grow in size and harvested at their maximum sustainable yield (MSY). The result is that while the EU produces 11kg of fish per capita annually (2016), this domestic supply falls short of the 23kg of fish consumption per capita in the EU. The EU has been able to maintain this high level of consumption by sourcing seafood from other regions of the world through imports and the catches of its distant-water fleet. This report, the ninth edition of an annual series, highlights Europe’s reliance on fish products originating from external waters for its consumption and provides recommendations for a sustainable seafood system.

In this report,we estimate the degree of self-sufficiency in fish consumption achieved by the EU as a whole and for each of its member states. Self sufficiency is defined as the capacity of EU member states to meet demand for seafood from their own waters. We express the degree of self-sufficiency in the form of a ​‘fish dependence day’. Based on a member state or region’s total annual fish consumption, the fish dependence day is the date on the calendar when it will begin relying on fish from elsewhere because its domestic supplies have been depleted.

The EU’s fish dependence day is now 9 July, indicating that the EU relies on non-EU waters for almost half of the fish it consumes. Last year, the fish dependence day was 22 July and the year before it was 7 July. The EU has therefore maintained a high degree of reliance on fish from non-EU waters, with its fish dependence day consistently falling in July. The EU’s fish dependence day is roughly three and a half weeks earlier than in 2000 and has only moved later in the calendar by seven days since 2007. The fact that the level of dependence on non-EU seafood is not increasing while many European fish stocks are recovering is a hopeful sign that the EU seafood system is becoming more sustainable. All else being equal, this should manifest itself as improving self-sufficiency over time. Currently however, the level of EU self-sufficiency is still too low and the level of fishing pressure in EU waters is still too high.

It is no surprise that member states with little or no access to EU waters, such as Austria, Slovakia, and Slovenia,become fish dependent early in the year. More surprising, however, is that many member states with significant coastlines are also fish dependent early in the year. These include Portugal, Italy, Germany, France, and Spain – the latter a country that sources more than half of its seafood from non-EU waters.

Our calculations of domestic production include aquaculture (fish farming) in EU countries, a growing global enterprise that has served to offset the overexploitation of EU fish stocks but has not itself reduced the overall level of fish dependence recorded. If we discount domestic aquaculture, the EU’s fish dependence day moves earlier in the calendar to 25 May. For large aquaculture producers such as the UK, Spain, and Greece, their respective national fish dependence days occur months earlier. Restoring EU fish stocks to MSY levels is another factor that would see significant gains in the seafood self sufficiency of many EU member states.

Restoring fish stocks in the northeast Atlantic to their MSY would increase the EU’s self-sufficiency levels by nearly three months (85 days), moving its fish dependence day to from 9 July to 2 October. If directed only to human food consumption, this could provide for the annual consumption of 57 million EU citizens. A lack of data in the Mediterranean and the Black Sea means that MSY estimates are not available, but these fish stocks are overexploited to a greater degree, and thus the benefits of recovery are potentially even greater.

Our bio-economic modelling has revealed the economic benefits in terms of revenues, profits, jobs, wages – and of course food itself – that an come from restoring fish stocks to MSY levels. How these different economic benefits are prioritised depends on industry structure and national policy, for example how quota is allocated to the fleet.

The EU’s fish dependence day is now 9 July, indicating that the EU relies on non-EU waters for almost half of the fish it consumes.

The EU Common Fisheries Policy (CFP) was reformed in 2013. This represents a significant step in the right direction as it lays the legal foundations to bring about the sustainable management of all fish stocks in Europe by 2020. The reformed CFP also includes a discard ban and requires member states to be transparent and take social and environmental criteria into account when allocating fishing opportunities. The CFP is supported by the European Maritime and Fisheries Fund (EMFF), which contains some positive measures, such as more funding to enhance data collection and to improve control and enforcement.

It is now up to EU member states to choose how ambitious they want to be in implementing the reformed CFP and how quickly they can deliver on the commitments of the CFP to bring fish stocks to their MSY by 2020. Healthy fish stocks mean more food, jobs, and profits, so the sooner we get there, the better for everyone. EU member states need to look beyond the short-term costs of fish stock restoration and turn the potential long-term benefits that healthy marine resources can provide into a reality.

The UK’s proposed exit from the EU adds a new dimension to EU fish dependency. Trading patterns are likely to change if the UK leaves the single market and seeks to form new trade relations outside of the EU. UK fisher organisations and campaigners for leaving the EU are also hoping that Brexit will give UK fishers exclusive national access to fish stocks that have historically been shared between EU countries – potentially allowing the UK to expand production at the cost of other member states. At this point, however, it appears that current arrangements will be maintained until at least the end of 2020. Whatever the outcome of Brexit, it is clear that sustainability is key. A situation where each side exploits a shared fish stock to the level it feels is ​‘fair’ will result in a worse outcome for all – the tragedy of the commons.

Healthy fish stocks mean more food, jobs, and profits, so the sooner we get there, the better for everyone.

In the context of finite resources and growing populations, the EU model of fish dependence has proven unsustainable. The EU’s high level of fish dependence has implications for the sustainability of fish stocks globally, also at risk of overexploitation, and for the communities that depend on them. Action on the part of governments, the fishing industry, and campaigners to improve the sustainability of EU waters is beginning to yield results, but this is only a partial victory. Rebuilding European fish stocks to their full potential – currently off track for the 2020 deadline in the CFP – will help, but we must also work to improve the environmental aspects of EU consumption and trade, and their impact on global fish stocks to create a truly sustainable seafood system.

To restore fish stocks to MSY and reduce levels of fish dependence, EU member states must develop longterm, ambitious fisheries management. Positive environmental outcomes can be encouraged by setting fishing opportunities in accordance with scientific advice and allocating these opportunities to segments of the fishing fleet with the lowest environmental impact. States must also promote ecologically responsible consumption levels and use public funds to support both fish stock restoration and fishing communities.

This research was made possible by generous support from Our Fish.