Car services in West Yorkshire and the potential for platform cooperatives 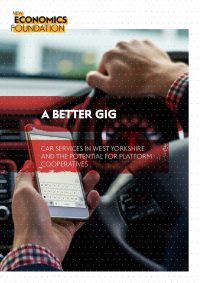 In the so-called gig economy, rewards are so far enjoyed by a handful of tech giants, and working conditions are being eroded. As part of the growing response to this, the New Economics Foundation has been supporting a group of private hire drivers in Bradford and Leeds to prototype a worker-owned private hire app ready for user testing and piloting. To inform this aim, this report presents research findings from target user groups based in Leeds and Bradford: residents not yet using Uber, and private hire drivers.

As the gig economy expands, increasing attention is being paid to the poor working conditions facilitated by platform apps. We posit that platform cooperatives ­– in other words, companies which use similar technology to the likes of Uber and Deliveroo but which are owned by their workers ­– can form an empowering response to the erosion of workers’ rights. The gig economy has seen significant growth since 2010. Tracking this, there has been a surge in gig economy workers organising against poor pay and conditions. This has taken place at a time of increased precariousness across the UK labour market, which, combined with record lows in unemployment, points to a normalisation of precarious, flexible, short-term work with limited worker protection.

We carried out three focus groups to determine people’s views on public transport in their respective cities; on private hire services including app-based services like Uber; and on the changes they would like to see in local transport. We met private hire drivers working in Leeds and Bradford; Leeds University students from the University’s Disability Action Group; and older people from the Great Horton Live at Home scheme in Bradford.

Of the drivers we spoke to, security, risk, and status were prominent themes. Beyond this, a major focus they had was the negative impact of the Deregulation Act 2015 on their livelihoods and the perception that local authorities give preferential treatment to companies like Uber. Overall, the drivers felt that the presence of Uber in the city was dividing drivers and turning them against each other. Despite this, it was also felt that Uber had ​‘revolutionised’ the business for private hire drivers and had set a new standard for service delivery.

For the passengers we spoke to, accessibility, safety, and service quality were most salient features. For the students, this centred on emotional safety whereas the older people we spoke to were more concerned about their physical safety. Both groups emphasised the importance of a personable, tailored, and conscientious service. When discussing a cooperative model, the students were generally enthusiastic, focusing on workers’ rights and challenging the hegemony of large companies. When discussing Uber and the development of a cooperative platform app, the older people we spoke to were sceptical.

The recommendations for change that emerged through conversations with drivers and passengers generally fell into three categories: safety (legal, emotional, and physical); access to a personalised service; and greater power transferred to drivers. The suggestions for change can also be thought of in terms of structural change (including improvements to public transport systems and legal protection for drivers); consumer choice and service (including the provision of consistent, reliable services with both phone- and app-based options); and awareness and training (including accessibility training).

There is growing dissatisfaction with the increases in the precariousness of the labour market in the UK. The findings presented in this report show that for many private hire drivers, their working lives are characterised by poor pay, poor conditions, and exploitation. They also show that passengers feel powerless to effect change and find that a lack of effective, accessible public transport leads to social isolation, exclusion, and dependence on support from others. We show that a private hire platform cooperative has the potential not only to improve working conditions for drivers but also to improve services for vulnerable communities.