A rail network for everyone

Probing HS2 and its alternatives 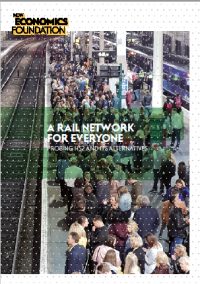 This report looks in considerable detail at the economic and strategic case that underlies the planned construction of new high-speed rail lines between London, Birmingham, Manchester and Leeds (HS2). It also looks at how the benefits of investing in the nation’s rail network could be shared more widely across the UK. However, in the debate about HS2, there is only one set of questions that is commonly asked: Should HS2 proceed, be postponed, be cancelled, or at least be re-routed?

The New Economics Foundation’s answer is linked to the evidence. Though HS2 is alluring as a project and enjoys cross-party support, the strategic case that underpins it is unconvincing and leaves the scheme looking like an expensive answer in search of a question.

It is impossible to ignore the reality: Contracts for phase 1 are soon to be let and the government may have already spent more than £4 billion on the project. Furthermore, judging HS2’s efficacy is made more difficult in the absence of a wider rail, transport, or economic strategy, and against a backdrop of poor management and coordination across the network. There is also a lack of available detailed data about passenger movements because it is collected by private enterprises and therefore ​‘commercially confidential’.

It is also important that the starting point of any debate about HS2 be the right one. Too often reports arguing against HS2 have started from the principle that it is too expensive and that it would be better to invest in cheaper infrastructure or not invest at all. This is the wrong point of departure as our railways suffer from massive under-investment in every UK nation and region. Putting that right will cost very significant sums of government capital. But in a time when the government needs to rediscover its fiscal role and invest more in productive assets, such as transport, that should not be a major barrier.

The problem with HS2, however, is that it is the product of decades of government retrenchment from the fiscal realm and strategic planning, and of a fragmented rail network, with multiple private sector and public stakeholders. It is also the product of an economy in crisis, an economy desperately trying to unhook itself from London-centricity and all its malcontents, but actually compounding the problem by starting the project in London.

Following a shambolic 18 months on the railways, with disastrous timetable changes, the wrong kind of weather, and the cancellation of planned electrification schemes, the government has launched a ​‘root and branch’ review. However, the review is missing some key roots and branches, two of them being HS2 and the latest package of maintenance and upgrades agreed with Network Rail. These have been deemed out of scope but should be included.

There are two fundamental problems with the railways in the UK that, in the interests of ensuring immediate and long-term value for public money, need addressing before the much-needed major investment is committed. The first is the absence of an overarching rail or transport strategy, which leaves HS2 looking like the solution to a problem that has not yet been defined. It is what many in the rail industry call an engineering-led project rather than something that enjoys strong strategic or economic justification. The second fundamental problem is the chaotic ownership and management structures that will almost certainly lead to the squandering of investment capital.