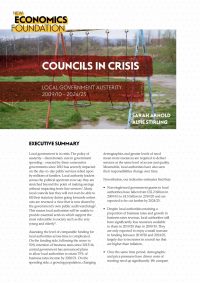 Local government is in crisis. The policy of austerity – discretionary cuts in government spending — enacted by three consecutive governments since 2010 has severely impacted on the day-to-day public services relied upon by millions of families. Local authority leaders across the political spectrum now say they are stretched beyond the point of making savings without impacting front-line services and will be unable to provide essential services which support the most vulnerable in society such as the very young and elderly.

The extent of the crisis

Comparing local authority funding across time is complicated as the composition of funding has changed, as well as the demographics and needs of the populations local authorities serve. Nevertheless, our indicative estimates find:

The need for reform

It is clear that local authorities will be unable to fill that gap without significant reform to the local funding landscape to ensure that vital local services are properly funded. It is likely this will involve significant reform to either business rates, council tax or both. It may also involve the introduction of new local taxes or the further devolution of those that are currently national.

The need for reform represents an opportunity to rethink the relationship between national, local and indeed even (sub)-regional government. What is the appropriate level of granularity for responsibility for revenue generation and service delivery? How can risk be effectively pooled, whilst ensuring local governments have the autonomy to be responsive to local need and priorities?

In addition, any reforms should seek to reduce systematic inequality of funding between different authorities and the potential for postcode lotteries for vulnerable people in need of services. Finally, they should not seek to remove power from local governments, and where possible give local government increased autonomy and control over generating revenue and spending it – as long as finance follows function and local authorities are able to deliver services to an acceptable quality.

This paper represents the first in a series of forthcoming papers from NEF outlining options for reforming local government finance.