Options for redesigning the the business rates retention system 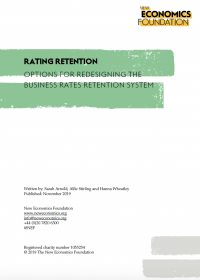 Local government finances are unsustainable. We estimate that local governments will face a funding gap of £27.8 billion annually by 2024/​25. The lack of funding is having a severe impact on local services, particularly adult social care, children’s services and homelessness support. Local authorities are responding to the funding gap by draining reserves, and the Chartered Institute of Public Finance & Accountancy has warned that many local authorities are in danger of completely running out of money.

Local authorities are primarily funded by a combination of central government grants, council tax and business rates. However, the balance of these funding sources has changed significantly over the last decade. Grants from central government have been slashed – from £32.2 billion in 2009/​10 to £4.5 billion in 2019/​20. Simultaneously, there has been significant reform to business rates.

The BRRS, therefore, serves multiple functions. It determines the degree to which councils retain revenue from business rates versus their redistribution; it is a crucial source of local government revenue; and it is currently the primary mechanism by which funds are shared equitably between local authorities.

The aim of the BRRS was to give councils more control over the money they raise locally, and stronger incentives to create and support local jobs and local firms – as they would be financially rewarded for doing so. However, it is open to criticism because it is highly complex to administer and understand; it has introduced uncertainty and volatility into the local government finance system as councils are more exposed to losses if business rates revenue falls; and the ability to raise business rates is geographically unequal. Furthermore, although it is meant to incentivise local economic growth and activity to increase business rates revenue, there is limited evidence that the scheme has led to such activity to date.

From 2021, the government is aiming to introduce further changes to the local government finance system, including the Fair Funding Review and reforming the BRRS. As part of the BRRS reforms, government has announced an intention to allow local authorities at aggregate to keep a larger proportion of business rates receipts. Originally, it was intended that councils would eventually retain 100% of business rates, but this ambition seems to have been scaled back and the latest government announcements suggest the move will be to 75% retention. Furthermore, as local authorities are allowed to retain a higher proportion of their business rates income in aggregate, government has confirmed it expects to withdraw most of the grants it currently allocates to local government, including the Revenue Support Grant and Public Health Grant.

Retaining a higher proportion of their business rates revenue and its growth may give local authorities stronger incentives to grow their business rates revenue and has been welcomed by many for this reason. But there is a clear trade-off between this goal and the risk of wider divergence between councils’ abilities to provide high quality services and leaving some councils behind. A key decision in the design of the BRRS (or any redistribution mechanism for local government funding) is the balance between incentives and equity.

This paper presents options for reforming the business rates retention system, assuming local tax sources remain as they are currently. Nevertheless, given the wide disparity in local economic conditions, it is likely that whatever revenue sources local government has access to, there may be a need for some form of redistribution mechanism. It must be noted that reforming the BRRS is concerned with how funding is distributed; it will not address the funding gap experienced by local authorities overall. In order to do that, we need to consider how council tax and business rates are designed and administered, which is the subject of the final report in our series on local government finances.