Landing the blame: overfishing in the Northeast Atlantic 2020 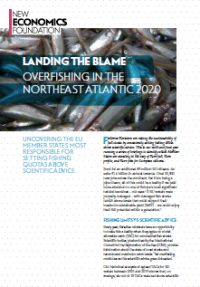 Fisheries ministers are risking the sustainability of fish stocks by consistently setting fishing limits above scientific advice. This is our sixth and final year running a series of briefings to identify which Member States are standing in the way of more fish, more profits, and more jobs for European citizens.

Food for an additional 89 million EU citizens. An extra €1.6 billion in annual revenue. Over 20,000 new jobs across the continent. Far from being a pipe dream, all of this could be a reality if we paid more attention to one of Europe’s most significant natural resources – our seas. If EU waters were properly managed – with damaged fish stocks rebuilt above levels that could support their maximum sustainable yield (MSY) – we could enjoy their full potential within a generation.

Every year, fisheries ministers have an opportunity to make this a reality when they agree on a total allowable catch (TAC) for commercial fish stocks. Scientific bodies, predominantly the International Council for the Exploration of the Sea (ICES), provide information about the state of most stocks and recommend maximum catch levels. Yet overfishing continues as this scientific advice goes unheeded.

The reformed Common Fisheries Policy (CFP) that entered into force in 2014 aims to restore and maintain populations of fish stocks above levels capable of supporting MSY. The corresponding exploitation rate was to be achieved by 2015 where possible and by 2020 at the latest for all stocks. As this series of briefings has documented, scientific advice on fishing limits to achieve this deadline has not been followed. The 2020 fishing limits were no exception. If Member States use the fishing limits allocated to them, then MSY will not be reached and the CFP will have failed to reach its sustainability deadline.

The negotiations over TACs are held by the Agriculture and Fisheries configuration of the EU Council of Ministers. These negotiations are not public; only their outcomes are. This lack of transparency means that ministers are not on the hook when they ignore scientific advice and give priority to short-term interests that risk the health of fish stocks.

This briefing, a continuation of the Landing the Blame series, reveals which Member States and ministers are behind decisions that go against the EU’s long-term interests. This conclusion is reached by analysing the outcomes of the negotiations and calculating which Member States end up with TACs above scientific advice. The key assumption is that these Member States are the main drivers of overfishing, either because they have been actively pushing for fishing limits to be set above scientific advice, or they have failed to prevent such limits being put in place.

During the December 2019 negotiations, ministers set the TACs for the majority of commercial EU fish species for 2020 – the final opportunity to set sustainable fishing limits and meet the 2020 MSY deadline. This analysis covers 120 TAC decisions made (or confirmed) at this meeting.

For the 2020 Northeast Atlantic TACs, Sweden, Denmark, and France top the league table of Member States with the highest percentage of their TAC in excess of scientific advice (Table 1). These Member States were involved with TAC decisions that allow fishing at 32%, 6%, and 6%, respectively, above scientific advice. Sweden also topped the 2019 overfishing league from last year’s analysis.

These three Member States, along with the UK, are also the worst offenders in terms of the total tonnage of TAC set above advice. Ministers representing these Member States received the largest TAC increases above scientific advice in terms of tonnes and are therefore the most responsible for impeding the transition to sustainable fisheries in the EU.

Sweden tops the league table with 12,006 tonnes of quota above scientific advice – equal to 32%. The vast majority of this excess TAC is due to herring in Skagerrak and the Kattegat (with cod and whiting in the same areas also contributing). Sweden shares this herring TAC with Denmark in roughly equal proportions but because it has much fewer TACs in the Northeast Atlantic than Denmark, the excess TAC is a larger percentage. By volume and value, the TACs in the Baltic Sea are much more important for Sweden. The Swedish minister responsible for fisheries, Jennie Nilsson, did not attend the negotiations; Per Callenberg, State Secretary to the Minister, represented Sweden in her stead.

In ClientEarth AIRs, the ​‘Council Bible’ of positions in the 2020 Northeast Atlantic TACs reveals that Sweden supported the MSY by the 2020 deadline and was one of the few Member States to support additional conservation measures in the TAC regulation itself.

The herring TACs, like the others in Skagerrak and Kattegat, were set in the Norway Agreement and then confirmed at the December Council. The European Commission proposed the high TAC that was accepted with no change. The only comments received from Member States in this area were on the banking and borrowing provision for cod, not the level of the TAC itself.

Analysing ICES advice and excess TAC by Member State illustrates that excess TAC is not just a function of the total amount of fishing a Member State carries out (Figure 1). If that were the case, then each Member State’s excess total TAC would be proportional to its total advice. Instead, we see a spectrum of excess TAC percentages, with some Member States frequently towards the top or bottom of these annual calculations. Although this does not prove that the worst offending Member States are pushing for higher TACs (that would require greater transparency around the negotiations), it is consistent with this thesis.