Universal Credit in the time of coronavirus

The benefit system needs reform now more than ever 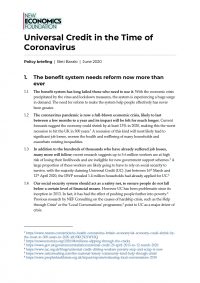 The benefit system has long failed those who need to use it. With the economy crisis precipitated by the virus and lockdown measures, the system is experiencing a huge surge in demand, and the need for reform to make the system help people effectively has never been greater.

Over the last decade, the design and implementation of our social security system have not been sensitive to the existing intersecting inequalities and has led to further worsening the living condition of many. We cannot run the risk of repeating these failures in the wake of the coronavirus pandemic.

The coronavirus pandemic is now a full-blown economic crisis likely to last between a few months to a year, and its impact will be felt for much longer. Current forecasts suggest the economy could shrink by at least 13% in 2020, making this the worst recession to hit the UK in 300 years. A recession of this kind will most likely lead to significant job losses, worsen the health and wellbeing of many households and exacerbate existing inequalities.

In addition to the hundreds of thousands who have already suffered job losses, many more will follow; recent research suggests up to 5.6 million workers are at high risk of losing their livelihoods and ineligible for new government support schemes. A large proportion of these workers are likely going to have to rely on social security to survive, with the majority claiming Universal Credit (UC).

Our social security system should act as a safety net, to ensure people do not fall below a certain level of financial means. But our social security system, including UC, has been broken for many years due to both system design flaws and the subsequent cuts introduced over many years which were not race and gender-sensitive and did not take into account intersecting inequalities. As a result, UC changes have further exacerbated existing inequalities with a disproportionate impact falling on women and BAME people, with BAME women in particular being worst affected. The economic crisis ensuing from the Covid-19 pandemic has the potential to have a negative impact on the same demographic that has already been disproportionately hit by austerity measures over the last decade.

Recent government reforms to social security in response to the coronavirus crisis, do not go nearly far enough. Reforming UC to both address immediate crisis and bring about long-term change is an imperative now more than ever.