The case for a working rent

We need to recognise the true social value of small businesses

Last month the government extended the eviction ban for commercial tenants until the end of the year. Though a welcome relief for business owners, in reality this only prolongs the agonising situation of trying to maintain their own and their employees’ livelihoods in a dire economic situation, whilst dealing with intransigent landlords.

The current crisis has highlighted the damaging effects of rent demands on small businesses, but this precarious situation was evident long before. Over the last decade, dramatic rent increases crippled small businesses across the country. In some cases, rent rises were so steep that otherwise viable businesses were forced to relocate, severing ties with their community. Having walked this tightrope for several years, compounded by their revenues collapsing through no fault of their own, they now have to choose between keeping staff and paying the property owner.

For the last two years in partnership with the East End Trades Guild and the Guardians of the Arches, NEF has been working with small businesses on a campaign for a working rent, using research with case studies to illustrate the inequity of the current situation and the benefit that these businesses provide to the capital.

Len Maloney, the owner of an East London car repair business, has seen first-hand the impact of rising rents on small businesses. Nearly 40 years ago, he walked into JC Motors in his school uniform and asked if they were hiring. He has worked there ever since and hired more than 60 local young people over the years. At least seven of them went on to achieve an apprenticeship, increasing their lifetime earnings by up to £139,000. Though he runs a profitable business and provides a valued service to his loyal customers, Len feels that the mentoring and skills development that he provides to his employees is the most important part of his work. This often extends beyond the workplace, providing stability to young people at risk of dropping out of school, helping them to build their confidence and improve family relationships. As he says, ​“My door is always open to the community.”

But all of the social value Len creates for his local community was put at risk when his landlord sought to more than triple the rent overnight. This rent level was completely unaffordable, reducing his ability to hire new staff and the risk to business prospects resulted in three workers leaving. Determined to fight for JC Motors’ survival, Len joined up with other tenants as part of the East End Trades Guild to push back against the proposed rent increases. He subsequently became a director of the Guardians of the Arches to organise with fellow Arches tenants across the country.

The ongoing work of our partner organisations and the findings of this research have led to significant improvements in relations between small businesses and Transport for London (TfL), an important London landlord and owner of approximately 800 railway arches across the capital. In light of evidence of rent affordability issues and the impending lockdown, TfL led the way on 20th March by announcing a three-month rent-free period for all SME tenants and those who were forced to close. This example of good practice from a major public sector landlord put further pressure on private landlords to follow suit.

In the short term, the three-month extension to the eviction ban will not be enough to avoid a catastrophic wave of business failures. The rent cancellations implemented during the early months of the crisis need to be extended and targeted at those tenants hardest hit by the crisis, particularly in cases where the landlord continues to demand elevated pre-crisis rents. In forthcoming research, NEF will analyse the extent of the commercial rent crisis since lockdown and evaluate the government’s policy options for addressing its effects and supporting the survival of small businesses.

Looking at the long term, our research has made the case for a working rent: an approach which is all the more necessary in the current context. This fairer and more sustainable rent system would allow a diverse array of small businesses to thrive as the backbone to our economy. A working rent would be transparent, with current rent levels made public so that prospective tenants can assess whether the landlord is offering rent in line with the going rate for the area. It would include security of tenure as standard, a feature which served our economy well for many decades but has been used less and less in recent years due to regulatory changes that handed additional power to landlords. And it would take into account the wider social value that small businesses can create when determining the rent level.

Critically, it would give tenants and landlords a more balanced relationship. Businesses could be confident to invest in their premises and workforce, and landlords would achieve a steady income from the stable business that would provide. The link between social value and rent levels is an area in which a number of London councils have been developing innovative new models, including Hackney, Haringey and Islington. They can see that a balance is necessary for the kind of communities we need in the future, one that offers a return for landlords but where the risk is shared and the true value of small businesses is recognised and championed.

The East End Trades Guild is raising money for a fighting fund to protect small businesses facing eviction at the end of the year. Donate to the Crowdfunder here.

Campaigns Save our railway arches

You can’t level up without a Green New Deal

Our government wants to be known for two things: levelling up, and fighting the climate crisis. But they don’t really understand how the two are connected. 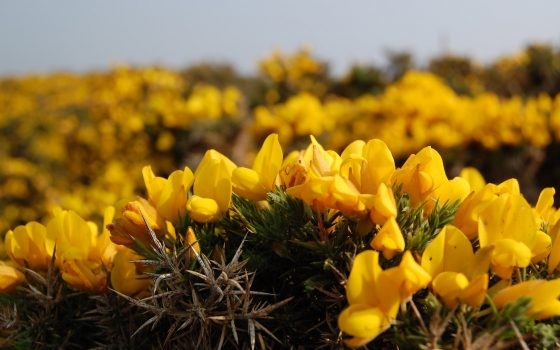 We can’t level up without restoring nature