The climate cost of airport expansion 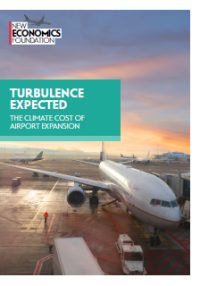 Despite the challenging period that the UK aviation sector has experienced since the start of the pandemic, a host of airports are moving to expand their capacity. These airports can be divided into two groups. Gatwick, Heathrow and Luton have officially notified government of their intent to apply for expansion as part of the ​‘nationally significant infrastructure’ (NSI) process, but have yet to submit their full applications and appraisal documentation. Four smaller, non-NSI expansions at Bristol, Leeds Bradford, Southampton and Stansted airports are going through the local planning process. These latter applications are more advanced and all four have received an initial planning decision – two approved and two refused.

In the context of rapidly evolving scientific understanding of aviation’s climate impact, and significant policy and forecast uncertainty as a result, in this report we look at the credibility of estimates of climate impact put forward by the four non-NSI airports as part of their planning applications. In this report, we conduct comparative analysis and ​‘re-modelling’ of carbon costs in order to present a credible range of estimates of the potential climate impact of each scheme at the airport level and put a monetary value on this impact. We identify a number of important failures of the non-NSI airport appraisals to follow best practice, often leading to significant understatement of the climate impact of the proposed schemes:

Taking these omissions in aggregate, applicant airports have ignored their exposure to uncertainty and risk and obscured potential airport-level climate impacts between two and eight times greater than indicated in their appraisal documentation. Expansion scheme promoters have also failed to account for the monetised cost of emissions caused by expansion, collectively worth £2.4 billion to 13.4 billion, and have overstated the economic case for expansion. Around 65% of this emissions cost will not be captured by current regulations on the aviation sector and will therefore be borne by society, either in the costs of capturing emissions elsewhere in the economy or in the social damage resulting from climate change.

This report questions whether decision makers had access to a complete and robust set of evidence upon which to base their determination; and further, whether local authorities are even the appropriate stakeholder to appraise the climate cost of expansion. In the case of the three large expansions at Luton, Gatwick and Heathrow which will be considered by central government, this report highlights the importance of ensuring applicants adhere to best practice in the appraisal process.