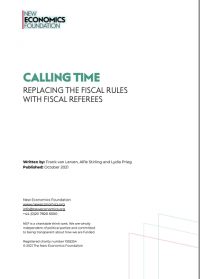 As the UK emerges from the largest peacetime economic shock since modern records began, the Treasury is preparing to publish the latest iteration of the government’s new fiscal framework – the arrangements, targets and institutions governing the implementation of public budgets. With monetary policy sitting at its so-called effective lower bound – the point beyond which further reductions in interest rates have a negligible impact on the economy – for more than a decade, the design of fiscal frameworks has rarely been so important. They must equip governments with the rationale and scope to navigate not only the recovery from unprecedented economic and public health crises, but also far greater existential challenges, such as averting, mitigating and adapting to the climate crisis and environmental breakdown. Given the scale and nature of the challenges facing the UK economy, fresh thinking around the government’s fiscal frameworks is required.

Under the bonnet: what’s wrong with fiscal rules?

In this paper, we argue that the conventional approach to designing the UK’s fiscal rules – targets for public debt and borrowing over a medium-term horizon – suffers from at least three major design flaws.

First, fiscal rules lack institutional bite and consistently fail on their own terms in holding chancellors to their targets, damaging the credibility of UK fiscal policy and undermining democratic accountability. Chancellors simply change their fiscal rules when they become too difficult to meet – they are a political tennis ball, not a tool of effective policy.

Second, based on an over-simplistic and politically expedient approach to macroeconomics, the fiscal rules have been guided by a narrow focus on the wrong targets and weak indicators of so called ​‘fiscal space’. Instead, we argue that fiscal space – the scope for further public borrowing before the amount of overall public debt presents a significant risk to the economy – is determined by a more complex set of macroeconomic dynamics than simple ratios between parts of the government’s balance sheet and gross domestic product (GDP).

Third, the conventional approach to designing fiscal frameworks assumes that all of the policy risk sits with the possibility of over-borrowing, or exceeding fiscal space. While this is important concern, we argue that in fact the risks have far greater symmetry than this. Too little borrowing – such as when needed to respond to recession or adapting to future shocks like climate change or health crises — should be considered as equally irresponsible and harmful to the economy as borrowing too much.

Towards a new approach

To help better optimise the use of fiscal space, better understand its constraints, and offer institutional bite, we propose replacing the fiscal rules with the establishment of fiscal referees – or Fiscal Policy Committee (FPC), appointed by government and parliament and guided by a set of fiscal principles. The fiscal referees would act as an independent advisory committee housed at the Office for Budget Responsibility (OBR) or another third-party institution. They would estimate a target range for the optimal primary balance – the difference between government spending and revenue before taking into account debt interest – over a rolling forecast period, and given wider macroeconomic dynamics.

The process of translating these assessments over fiscal space and prevailing risk into a target range for the optimal primary balance would need to follow a set of fiscal principles (eg based on resource constraints, full capacity utilisation, the private sector balance sheet position, public sector net worth, and more) set out in the committee’s mandate.

Decisions over the level and nature of tax and spending would remain solely with the Chancellor and wider government, but they would no longer set and mark their own homework. Either undershooting or overshooting the range would constitute a missed target, and the Chancellor would be required to write a letter of explanation and give verbal evidence to a body of parliament if ever the target range was missed in this way.