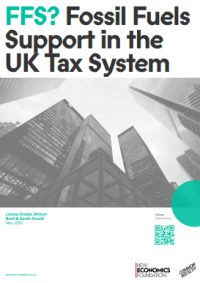 As the host of the recent 26th United Nations Climate Change Conference of the Parties (COP26) the UK had an opportunity to showcase leadership in taking decisive steps towards deep transformation and decarbonisation of the economy. Further, the UK Government’s recently published net-zero emissions by 2050 strategy provides a foundation to develop a publicly-directed programme of rapid decarbonisation and shared prosperity, and highlights that ​‘we do need to reduce our reliance on hydrocarbons as swiftly as possible.’

Yet, despite its domestic climate goals and international commitments, the UK continues to offer a number of tax reliefs for both domestic production and consumption of fossil fuels. In the last 5 years, the value of UK support to fossil fuels mounted to approximately £12bn annually on average.

Findings in this report uncover that despite the UK being a part of the December 2015 Paris Agreement on climate change, the level of fossil fuel support in the UK tax system has not been substantially reduced. While the overall level of domestic support has fallen from £17bn to £10.5bn in 2020 – 21 (in real terms), this includes a fall of £2.3bn in direct budgetary transfers rather than changes to tax reliefs, as well as a fall of £2bn between 2019 – 20 and 2020 – 21 linked to the steep economic contraction caused by the Covid-19 pandemic.

Looking at the pre-pandemic figures shows fossil fuel support falling in real terms by £4.5bn between 2015 and 2019, but with about half of this fall resulting from a decline in direct budgetary transfers (which typically go towards coal mines decommissioning costs and vary hugely from year-to-year). Tax reliefs for fossil fuels — representing a continuous feature of the tax system — have declined before the pandemic by only 15% in real terms since 2015, from £14.7bn in 2015 to £12.5bn in 2019 (in 2020 – 21 prices). Over this time period, no major measures have been withdrawn — with the exception of the announced plans to reduce eligibility for Red Diesel relief from April 2022 — suggesting the government has not taken meaningful action to align its tax and subsidies system with climate goals, and is instead supporting the continuation of harmful environmental behaviour. The removal of subsidies, particularly consumer subsidies that impact low income households, should be considered carefully. It is vital that as subsidies are withdrawn, policies are put in place to mitigate the impact on those who cannot afford the change.

In the face of the climate and environmental crises, and the short timeframe left to avert breakdown, it is increasingly clear that the current rate and scale of action will not deliver a safe future. In place of this we need a deep transformation of design and operation of the economy. This will require structural policy shifts, as well as a step-change in public investment. Tax revenues can play an important role in sustainably servicing this increased borrowing. Crucially though, by bringing together the twin goals of a Green New Deal – securing economic and climate justice — a reimagined UK tax system can play a central role in driving a more equitable distribution of wealth while reorienting economic activity away from high-carbon production and consumption. Phasing out UK fossil fuel support needs to be part of a coherent strategy to ensure an orderly, just, and rapid transition.

1. Changing the definition to change the debate

The UK Government currently relies on a narrow definition of a ​‘subsidy’, obscuring the scale of effective fossil fuel subsidisation. It is imperative that HM Treasury re-evaluates its current definition, aligning it instead with a more comprehensive approach to identifying fossil fuel subsidies; one that incorporates tax reliefs, subsidies and support, recognising that choosing not to tax something through reliefs is a choice to subsidise its usage.

2. Initiating a rapid phase-out of fossil fuel subsidies and support

In line with the UK’s commitment under the G7 pledge of ending all subsidies by 2025, the government should create a comprehensive roadmap to immediately substantially reduce and then rapidly phase out fossil fuel subsidies completely over the next few years. A central pillar of a climate-just tax system should be safeguarding low-income households and marginalised communities against higher costs after the phase-out, for example through revenue recycling. Such tax changes should be part of a broader green industrial strategy, steering green industries of the future and nurturing green infrastructures.

Following the recommendation from the Climate Change Committee (CCC), HM Treasury recently published a Net Zero Review, aimed at looking at how households, businesses and the government could contribute to transition; identify equitable transition mechanisms, consider economic growth opportunities and evaluate the trade-offs of different measures. The government should build on this and extend the remit of the Net Zero team to encompass a just transition across all Treasury policies (including the tax system and resource decisions influencing other departments). This dedicated just transition team should have a direct reporting line to the Chancellor and should monitor progress in responding to the CCC recommendations, alignment with the Paris Agreement, and, working closely with the existing Cabinet Committees and BEIS Directorates working on climate and net zero, advise ministers how to reduce emissions in the most progressive way. It could also help strengthen democratic accountability by providing regular updates to Parliament (and with Parliament making final tax & spending decisions informed by this advice). Lastly, it could support wider cross-institutional coordination, including the Bank of England, the CCC and other Ministries, through an establishment of a Green Finance Action Taskforce (GFAT).

In addition, the report sets out a number of specific measures on tax relief, including:

The UK Government should phase out this relief whilst providing transition support to households, such as ​‘climate dividend’ payments and measures enabling them to move to clean heating alternatives. The removal of some consumer subsidies, particularly the £3.6 billion VAT relief for domestic heating, must be designed very carefully, particularly in the context of the rise in energy price cap (which puts a limit on the maximum price producers can charge for energy). The VAT relief protects low income households from bearing the full cost of increasing ginas and electricity prices, especially because direct income support measures such as Winter Fuel Payments have been fixed since 2000/​01 at between £100 and £300 depending on circumstances. As consumer subsidies are phased out, revenue gained must be used to support low income households, and ensure that they are appropriately protected over the transition period to affordable clean heating.

Ring-fence oil and gas corporate income tax reliefs subsidise fossil fuel companies allowing them to deduct costs of decommissioning old infrastructure as well as capital expenditure on new plant and machinery from their taxable profits, which reduces their taxes and may lead to tax refunds. The Government should immediately withdraw subsidies for any new fossil projects, apply the ​‘polluter pays’ principle for decommissioning and accelerate plans for a just transition for the North Sea workers into zero-carbon jobs.

As qualifying industrial uses would not typically result in carbon emissions, the exemption is justified on principle, although the government should step up its monitoring of potential harmful environmental impacts even if not directly emissions related. Furthermore, due to risks of fraud – where ​‘tied oil’ is illegally put to use, such as burned as fuel – the government will need to step up monitoring of this relief when it begins the phase out of other reliefs for carbon-emitting uses. 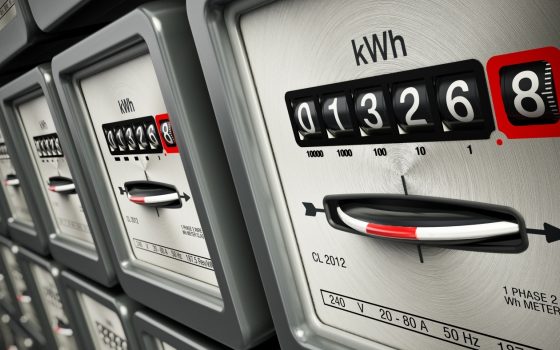