The social case for nature

A case study from Benacre-Kessingland, Suffolk 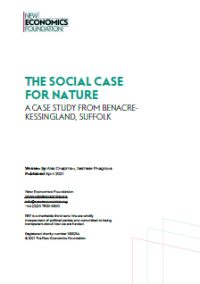 The UK government has issued new guidance on project design and appraisal to capture a more rounded picture of the impacts of public projects on social inequity. In doing so, the government hopes to ensure that public investment maximises its contribution to its ​‘levelling-up’ and climate change mitigation agendas. Both of these agendas are of particular relevance to the UK’s coastal communities.

To date, socioeconomic assessments of nature-based flood protection and coastal habitat creation projects have often struggled to measure and integrate social impacts and their distributional makeup. This has been driven by a lack of evidence, under-emphasis in guidance documentation, and challenges presented by the location-specific nature of each restoration scheme. As a result, national studies have sometimes suggested coastal nature restoration offers low rates of social return on investment (SROI), despite evidence to the contrary in many project-level assessments.

Flood defences just south of Kessingland village in Suffolk are only a few years from critical failure. Without action a number of private residential properties, businesses, and a significant area of agricultural land are at risk of flooding. This report assesses the socioeconomic impacts of a proposed flood and coastal erosion risk management (FCERM) and habitat creation scheme. It utilises techniques recently added to the government’s Green Book appraisal guidance including welfare weighting and distributional analysis to paint a more complete picture of the scheme’s potential value to the local community and to demonstrate how a nature-based intervention can deliver on the government’s levelling-up agenda.

This analysis is informed by engagement with local residents and project partners which inspired the creation of a new intervention scenario, herein the ​‘enhanced scenario’. The designation refers to a project design which aims to maximise local social value by providing high-quality public access, amenities, educational provision, and new income generation opportunities in the local area.

The socioeconomic impact of the enhanced scenario is then assessed across four new outcome areas: (i) increased local spending, (ii) health and wellbeing benefits and (iii) educational benefits derived from increased access to nature and green space, and (iv)increased tourism revenue generation potential.

Analysis by the New Economics Foundation (NEF) shows that households in the immediate vicinity of the proposed intervention are well below the national and regional average across multiple determinants of wellbeing, including income, health, and the provision of green space. As such, welfare weighting is applied to reflect the proportionately higher marginal utility of improvements under three of the outcomes assessed: (i) increased local spending, (ii) health and wellbeing benefits, and (iii) educational benefits.

Our modelling implies a new NPV of the overall scheme benefits (pre-displacement) of £37.6m – £41.1m, up from the figure of £31.6m established by Jacobs in their more traditional FCERM assessment.1 If 100% displacement is assumed on spending and tourism flows (a worst-case assumption), the total scheme benefits are estimated at £35.3m – £36.7m.

When factoring in the other local benefits of the scheme in outcome areas established by previous studies (primarily flood protection of property), the total socioeconomic benefit to the local public and local businesses is estimated to be equivalent to around 38.6% of the total scheme benefits. A further 52.9% of the scheme benefits are estimated to accrue at the regional level, with the remainder (8.5%) accruing at the national study level.

This distributional breakdown can support project stakeholders in determining an appropriate allocation and sourcing of the scheme’s investment finance. The report also discusses how the scheme’s local socioeconomic value might be further enhanced by exploring ways to increase the local economic multiplier from the scheme’s expenditure. For example, pursuing local social value in procurement terms and conditions, fixing ownership of the site in the local community, and setting local social value and ownership as an objective in long-term funding arrangements, such as endowments, and enabling development.

Through our case study in Kessingland we demonstrate that nature-based flood defences should be seen as broader economic assets, with the potential to impact outcomes in areas such as health, local economic development, inequality and social deprivation. We also show that a wider social impact assessment of nature-based interventions might significantly improve the performance of such schemes under appraisal, thereby improving their ability to attract capital, and boosting their contribution to the UK’s decarbonisation agenda. Our research highlights that new developments in HM Treasury appraisal guidance, if rigorously applied at the local planning and departmental levels, have the potential to shine new light on the levelling-up potential of government investments.