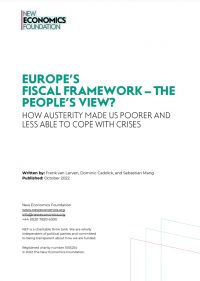 The set-up of Europe’s fiscal framework transformed the 2008 global financial shock into a self-made economic crisis and an unnecessarily prolonged recession. Instead of scaling-up transformative environmental investment that would have simultaneously catalysed a strong recovery, increased energy security, and boosted living standards, a policy of ​“austerity” won the day. Our analysis shows that European citizens have been left just under €3,000 a year worse off in their household incomes since the global financial crisis and that two out of three people polled agree EU fiscal rules should be changed to allow governments to increase spending on education, health and social care, and jobs.

Even though pursuing harsh austerity during a deep recession is completely at odds with mainstream economic theory, EU governments have followed this path leading to permanent scarring of incomes, reductions in capital spending, and cuts to social expenditures. They labelled these as necessary despite being entirely political choices. There has been scant public political debate around whether a different approach to fiscal policy could have resulted in a better outlook for social, economic, and environmental prosperity. More presciently, whether the decision to prioritise debt and deficit reductions over investment endangered the goals of achieving net zero and left Europe more vulnerable to energy price shocks. Indeed, the Covid-19 lockdown amounted to a further rolling back of the principles underpinning austerity. The EU’s fiscal framework should make us question the use of rules in the past if they can be ignored at critical moments.

All too often key decisions regarding the EU’s fiscal framework either take place behind closed doors or are left to technocrats. The voices of the general public have frequently been left out of the vital decisions that shape their economic future and day-to-day livelihoods.

To help foster a greater understanding of public opinion, inform the policymakers, and gain knowledge of the lived experience of Europeans, the New Economics Foundation and Finance Watch conducted a cross-country survey offering data from representative national samples of 5,000 citizens across Denmark, France, Germany, Ireland, and Italy. The survey entailed several questions regarding EU citizens’ views on austerity and the EU’s fiscal framework. This briefing examines the survey findings, in light of the recent macroeconomic analysis of the effects of austerity on household incomes, capital investment and climate targets, and wider social expenditure.

We find that against a backdrop of an austerity-stricken Europe, citizens have been left just under €3,000 worse off in their household incomes and have seen €1,000 less spent on their public and social services per person. Furthermore, an investment gap of over €500 bn has prohibited accelerated action on climate change and other investments to make the economy more resilient to shocks. Our survey suggests that 70% of Europeans are concerned about the impact the reimplementation of austerity could have, which appears largely due to the negative effects austerity has had in these nations.

However, 70% of Europeans are just as concerned about rising debt levels. This is important as our analysis shows that fiscal rules that led to austerity have not succeeded in bringing debt down. If the EU is to address its citizens’ concerns about debt, then austerity is not the answer. Instead, stronger social spending is more in line with European opinion with 64% agreeing that EU fiscal rules should be changed to allow governments to increase spending on education, health and social care, and jobs.

The timeliness of our survey and analysis is intended to help inform policymakers ahead of the European Commission publishing an orientation paper that lays out its suggested direction for the EU’s economic governance review, including the EU’s fiscal framework, the Stability and Growth Pact, and subsequent fiscal legislations. This review will determine the rules for government borrowing and spending once the escape clause that was triggered to allow increased spending in response to the Covid-19 crisis and the Russian invasion of Ukraine is closed at the end of 2023. Without a deep reform, governments may be forced to implement austerity policies once again. Our cross-national survey, however, indicates a clear desire for more fiscal flexibility, even from Europe’s most notoriously fiscally frugal country – Germany.

In light of our findings, we argue that over the past decade the European policy approach to the deficit and debt has not been grounded in economic reality and, as our polling results show, has likely gone against the interests of the majority of Europeans. Austerity and overly rigid fiscal rules were ultimately a political choice, rather than an economic necessity. Policy choices and mistakes of the past mustn’t be repeated; fresh thinking around the fiscal frameworks is urgently required. Lessons from the Covid spending packages could offer a model for dealing with the present energy and environmental crises.

There are 940,000 homes in England with damp and mould. This government should take a healthy share of responsibility for this.