A New Way to Govern

Organisations and society after Enron

The collapse of the multinational oil giant Enron has lent new force to the debate about the way we run and regulate large organisations.

Whether they are oil companies, social enterprises or hospital trusts, organisations play a powerful role in our lives – yet the formula for making them both accountable and efficient has proved elusive. While opinions still differ about the virtues of nationalisation, few would argue that privatisation has been an unqualified success. The search for a new model continues.

In this NEF pocketbook, Shann Turnbull argues that the Enron debacle, and the failure of privatised entities such as Railtrack in the UK, are symptoms of a wider crisis in corporate governance. Top-down ​“command and control” hierarchies, the organisational model which is virtually synonymous with capitalism in the English-speaking world, have outlived their usefulness.

They cannot cope with complexity or human diversity, they cannot regulate themselves and their centralised power structures make them vulnerable to corruption.

A new breed of ecological organisation is needed, based on the way nature manages complexity, to decentralise decision-making, involve stakeholders in self-regulation and provide a way out of the sterile public-versus-private debate. Properly implemented, argues Turnbull, such ​“network governance” could humanise globalisation and make organisations, of all sorts, genuinely accountable. 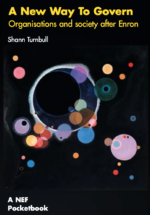