Towards an asset-based NHS

The missing element of NHS reform

The National Health Service is wasting up to £8.4 billion a year by ignoring the potential of its most valuable assets.

Experience in the UK shows that neighbourhoods are the critical factor that is missing from both the public health debate and from NHS strategy.

Current health policies misunderstand the potential of patient involvement. The government is struggling to put a few professional representatives on powerless local boards, but ignoring the vital importance of a supportive neighbourhood if people are going to be healed and stay well.

The Health Minster has recently announced a consultation on public health, partly as a way of tackling the issue of chronic health problems, and partly as a question of personal responsibility for personal health. While NEF welcomes the consultation, this report questions the conventional premise under which the public health debate has been developing — looking at the role that retailers, schools and business might have, but ignoring the critical assets that the NHS already possesses: its patients and their neighbours, and its frontline staff. 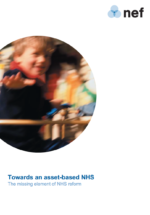