The figures drawn together in Cast Adrift, could be the tip of the Iceberg. The former head of one of the world’s largest insurance companies has already forecast that by about 2065, the cost of natural disasters mostly related to climate-driven events would exceed gross world income, bankrupting the global economy.

Given rich nations historical responsibility for global warming, and the resources at their disposal, at the very least the funds available for adaptation to the majority world should be raised substantially.

NEF believes that: an initial assessment of the cost of adaptation on the best available predictions for various scenarios of warming is urgently needed, and that: in the mean time, rich nations should at the very least devote as much funding to assisting poor countries to adapt to the impacts of climate change as they do subsidising industry to fuel it – currently $73 billion each year. 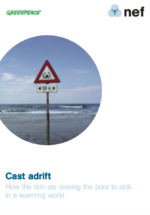