Banking failure and how to build a fit financial sector

Our banks have ceased to fulfil their original function. Once they thrived on the business of ordinary people and businesses; now they are so big and remote that that basic service is a sideline.

They have neglected and undermined the small shops and local enterprises that create most jobs and help provide the social glue that holds communities together. And it’s set to get worse. Branches are still closing; those that remain have no local managers and deal with loan applications on the basis of abstract national and regional formulae. The shift in the shape and business model of banks over the last generation has not just precipitated the present financial crisis but has rendered banks ​‘unfit for purpose’.

Yet a financial system that is fit for purpose can be created by returning the banks to scale, investing in communities and supporting small businesses. Now is the opportunity. The sleeping architecture for a new, resilient economy exists.

However much the marketing campaigns of the banks extol their local virtue, the harsh truth is that they have, without exception, withdrawn from their place in the heart of the community. In doing so, they have played a role in the hollowing out of local economies and communities. They have systematically withdrawn small business services. In fact, the evidence suggests that access to appropriate credit has been increasingly denied to small companies, individuals and social enterprises for, at the very least, the last decade.

Banks have closed thousands of branches in the name of efficiency, with dire consequences for local economies, a phenomenon the New Economics Foundation (NEF) documented as far back as 2002 in our first Ghost Town Britain report. Small and medium-sized enterprises (SMEs) account for a major proportion of UK jobs, and are vital to our economic resilience during turbulent times.

As the impact of the financial crisis begins to play out in full, the scale of the potential implications for the real economy is becoming clear. Jobs are under threat, investment levels are falling and businesses’ confidence is plummeting. The media have focused on the thousands of job cuts being made by big corporations, but it is small businesses that account for the majority of private sector jobs: 59.2% in 2007, around 13.5 million jobs overall.

The Government has announced a raft of measures and billions of pounds in support for small businesses. This includes £1 billion in a Small Business Finance Scheme, another £1 billion for small exporters and a further £4 billion from the European Investment Bank (EIB). Yet, the vast majority of these funds are being entrusted to the very banks whose exodus from the high street has so clearly failed the dynamic small businesses that hold our economies together.

While the banks flooded our economy with inappropriate credit, islands of disadvantage were undergoing a drought. This meant that those living in areas poorly served by mainstream finance were forced to develop and build alternative methods of saving, exchanging and lending.

Innovative organisations have been working on the frontline of financial exclusion to develop practical solutions to the consequences of banks’ neglect for well over a decade. Community finance, modelled on microfinance – the provision of very small loans the banks deemed too small to concern themselves with – was a key part of the Government’s social exclusion policy as far back as 2000. The Social Investment Task Force (SITF) set out to create the conditions for a vibrant, entrepreneurial community development sector by supporting community development finance institutions (CDFIs). These institutions seek to provide the financial irrigation that enables a myriad of small enterprises to survive in spite of banks’ neglect.

The Government’s myopic obsession with big finance has been demonstrated by the contrast between its measures and President Obama’s stimulus package, which included $100 million to community finance institutions including banks, credit unions, social venture capital and community banks.

In response to the financial crisis, the UK Government has bailed out the biggest banks to the tune of £37 billion. CDFIs, however, have received relatively little government support, despite the important role they have played in tackling social and economic challenges of disadvantaged communities. But even without coordinated government support, CDFIs have grown to form a vital element of the sleeping architecture of a more diverse and resilient financial system. With investment, it has the potential to play a far more significant role in local economic development.

To date, the Government’s response to the crisis has been preoccupied with a return to ​‘business as usual’. Yet to do so would leave the fundamental causes of the crisis unaddressed, meaning that we store another, bigger problem for the future. The current state of flux offers a unique opportunity to rebuild a fundamentally different financial system. One that is fit for purpose. There are several ways in which we could act now to build a financial system that will enable us to better weather the coming economic storm, and in doing so will enable us to rise out of the ashes of the crash with a more resilient financial system.

A ​‘sleeping architecture’ of the new economy already exists, in initiatives like credit unions, community finance and local enterprise schemes. They have been operating on the front line of the old economic order, but they need support.

As the Government has taken unprecedented action to bail out the biggest banks, it must also act to strengthen and underpin the small, local organisations valiantly shoring up our local economies and communities.

If we are to rebuild a more resilient financial system, they must be nurtured and embedded into public policy to complement the existing banking infrastructure. The future of our local economies and communities depends on it. 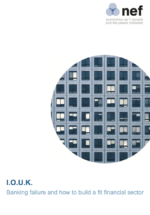