Urgent reforms to re-localise Britain – that all three main political parties have committed to – are under threat because politicians don’t understand localism.

Unless the debate about localism is broadened, the narrow Westminster understanding of the issue will frustrate the re-locatlisation which is needed if we are to get Britain working again.

“Politicians have narrowed the localism debate because they only have the language of centralisation with which to discuss it,” says Boyle, ​“The result is that they only ever discuss politicians’ versions of localism — government functions, elections and local committees.”

Political understanding of localisation has impoverished the debate, and as a result, local economies and communities are losing out. Instead, localism is about how to make things work, and how to escape from the centralisation that is making Britain seize up.

Boyle ends the pamphlet with a call for a debate which is less about committee meetings and more about life, and must include: 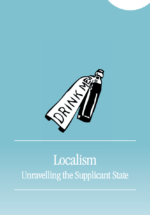