How the UK holds back global financial regulation

The UK is subverting progress towards a safer financial system, and has become a major barrier to international efforts for reform.

Compared even to the US, a jurisdiction with a reputation for market friendly regulation, and other major international jurisdictions, the UK is found to be part of the problem in key areas of financial reform, and not leading the search for solutions.

In areas including potentially damaging commodity speculation, the Alternative Investment Market, naked short-selling and the operations of British tax havens, the UK is holding back urgently needed regulation. Subverting Safer Finance finds that:

In order for the UK to demonstrate that it wants a to deliver a safer financial system, we believe the minimum necessary actions include: 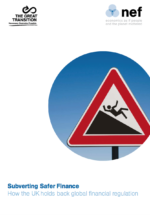