This report, commissioned by the Food for Life Partnership, uses a Social Return on Investment (SROI) approach to identify the value that local contracts for school meal ingredients have for local and wider society in two English local authority areas, Nottinghamshire and Plymouth. It focuses on the procurement of seasonal, local produce.

The New Economics Foundation (NEF) was commissioned by the Food for Life Partnership (FFLP) to undertake a study of the wider social, economic and environmental impacts of FFLP procurement practices for school meals. The study has been carried out in relation to two case studies: local authority procurement in Nottinghamshire and Plymouth. This draft report sets out the results.

Following a Social Return on Investment (SROI) approach, our analysis is based on engagement with key stakeholders involved in the supply of ingredients for school meals in Nottinghamshire and Plymouth. Stakeholders helped us identify the principal outcomes from a focus on seasonal, local produce. These were then valued to reveal the impact that local contracts for school meal ingredients have for local and wider society.

A summary of our results is as follows:

Separate from our main outcomes model, we looked at the multiplier effect from procuring a higher share of ingredients for school meals from the local economy. Comparing current spending and re-spending in Nottinghamshire now and prior to a focus on procuring locally and seasonally shows that the total amount of money circulating in the local economy from this source has increased substantially, from £181,418 in 2004 to £3,826,688 currently.

The multiplier calculation, based on the ratio between the initial injection of income to the local economy and the total circulation of the money within it, shows that currently for every £1 spent initially from the Nottinghamshire school meals budget on seasonal, local ingredients, a further £1.19 of economic activity is being generated. In Plymouth, money circulation as a result of spending from the school meals budget in the local area amounts to £1.2 million per year, with an additional 85 pence worth of activity being generated per £1 of spending. 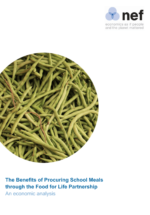