Elmbridge is a pleasant place to live for many, but it also has its hidden challenges. This report focuses on the challenge of inequality, which appears more significant in Elmbridge than in the UK as a whole, and affects everyone in the borough.

Despite such challenges, local people and organisations can make a difference by working together to ensure that Elmbridge is a better place to live for everyone.

This report is concerned with economic inequality and its consequences in Elmbridge. Through interviews with residents as well as a statistical analysis of key trends, this report explores:

Elmbridge is seen by its residents as a pleasant place to live but the borough has a number of hidden challenges. It is an unequal borough, with a much wider pay gap between those in the top and bottom 20% of earnings than nationwide.

Inequalities can also be seen in housing, where Elmbridge is host to some of the most expensive properties in the country and high house prices mean that home ownership is out of reach for many. The gap in life expectancy between the least and most deprived stands at around six years. As has been demonstrated elsewhere, inequality affects everyone – across the income spectrum – but in different ways.

Elmbridge is an expensive borough and those on low incomes struggle to meet everyday costs. They feel looked down on and cut off from certain places. They find it hard to access stable, reasonably paid employment. Due to inadequate public transport and being unable to afford to run a car, many lack mobility. Several feel a lack of control and involvement over the decisions that affect their lives and their communities.

Proportionally, Elmbridge has fewer middle-income people than elsewhere in the UK. People in this income group are well aware of the promotion of a certain ​‘Surrey lifestyle’ but do not earn enough to achieve this without financial strain.

They often feel worried by extensive financial commitments and experience a sense of insecurity about their future employment. While those on high incomes are not immune to the social and financial pressures experienced by middle-income residents, they are less likely to feel financially squeezed and spend more time outside the borough.

Inequality is affecting Elmbridge as a whole. This may lead to a decline in community spirit and mixing between social groups. Inequalities in income and life experience are large enough to cause some to express feelings of suspicion and alienation.

Elmbridge residents recognise the extent of inequality in the borough and think that such inequality is unfair, yet hard to change.

There are already many examples of local groups working together to alleviate the challenges of living in Elmbridge, but more could be done.

Based on our conversations with Elmbridge residents, as well as our workshop with members of the local statutory, voluntary, and community sectors, Walton Charity intends to: address inequality, work in partnership with others, encourage and support others to work together, and champion positive change for local people. 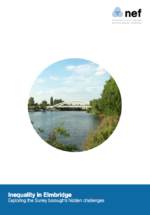