New research: More than half of self-employed not earning a decent living

While unemployment has dropped, new research shows that the state of the labour market is far from improving

More than half of all self-employed people are failing to earn a decent living, according to new research by the New Economics Foundation.

The research, based on data from the ONS Labour Force Survey and the DWP Family Resources Survey, shows that two in every five people employed in the UK last year were in ​‘bad jobs,’ defined as jobs which do not provide a secure, living wage. That figure rises to 54% for the self-employed.

Whilst the latest unemployment figures are likely to be the lowest seen in decades, the reality is less optimistic. Employment figures are being propped up by increasing numbers of self-employed people. While many choose self-employment in order to benefit from flexibility and independent working conditions, this research shows how many fail to earn a decent living. This is combined with record numbers of people on zero hours contracts – which have increased fivefold since 2011. 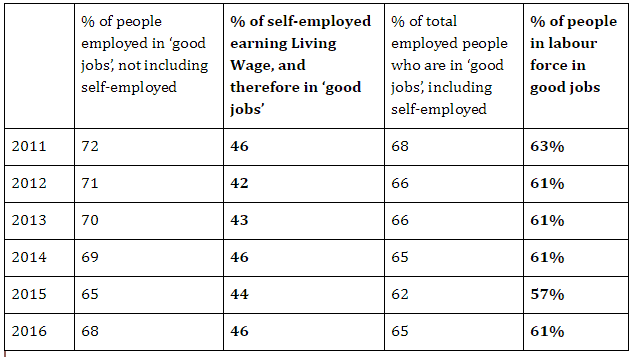 “The overall unemployment figures paint a far more rosy picture of the labour market than what we know to be the reality – an underpaid and insecure workforce stretched to the limits.

One in three people on zero hours contracts say they don’t have enough hours to provide for themselves.And while some benefit from the flexibility of being self-employed, many don’t. The rise in self-employment is hardly a cause for celebration when over half don’t earn enough to live a decent life.

It seems that good jobs were the sacrifice made to avoid the worst effects of unemployment during the recession. But the situation for many is reaching crisis point.

At the New Economics Foundation we are supporting people to take control of their working lives. It is vital that the voices of workers are at the forefront of the debate about the future of work.”

The Living Wage is independently calculated each year by the Living Wage Foundation, based on what employees and their families need to live.