Social Care as a Local Economic Solution for the West Midlands 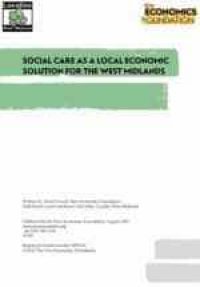 You don’t need to be an expert in adult social care to know that it’s in deep trouble. High-profile, distressing exposes like that from Panorama reveal a sector on the verge of –perhaps already in – full-blown crisis.

People are living longer. In the UK the number of people over the age of 85 is expected to double by 2030. Yet thanks to Government cuts and the dysfunctionality of our care system, council spending on adult social care in England fell 8% in real terms between 2009-10 and 2016 – 17. More funding from national Government is the obvious place to start. But take a look under the bonnet of the care system and you quickly find that it is in need of a major overhaul. A fifth of all publicly funded care homes in the UK are provided by the five biggest private chain providers. As we found back in March, £115 million of every £2 billion of public spending on social care will disappear straight into the pockets of investors and shareholders in those five companies alone. This is classic ​‘leaky bucket’ syndrome: money spent locally, to meet local needs, but which is siphoned off.

Yet there is a different way. After all, care is a major economic sector, employing 1.4 million people and contributing over £40 billion a year to the UK. Our aging population pretty much guarantees that care is a sector that will continue to grow over the years ahead. And with a new emphasis on industrial strategy, there are major win-wins from treating care not as a depressing ​‘cost’ but instead to lavish it with the attention usually given only to shiny economic totems, like technology or pharmaceuticals. Care could get tens of thousands into work around the whole of a local economy – in a new generation of small, locally-rooted and highly valued community-scale providers.

In a new report written for Localise West Midlands, we look at a part of the country where 25,000 extra jobs will be needed by 2025 alone. The newly-constituted region’s approach to economic development has so far been largely defined by the GDP-first focus handed to it by the Treasury as part of its devolution deal: attracting export-led, high-end and glamorous industries. Yet we show that community-scale social care is well placed to help public money spent locally do far more good in local economies.

Instead of dominance by a handful of ​‘too-big-to-fail’ care providers, we propose that the new Mayor of the West Midlands, Andy Street, focuses on building a new ecology of community-scale care providers. The resilience of the sector as a whole would be sharply improved, as would the quality of care. The Care Quality Commission, which regulates social care in England, rated the quality of community-scale social care providers as the highest in the sector, and smaller homes as better than larger ones. It’s a natural gateway to a career rich with the potential for skills development, and is a sector well-suited to social enterprise. 86% of all of the social care enterprises in the West Midlands employ fewer than 50 people, and two-fifths employ fewer than five.

Encouragingly, Mr Street – once the boss of John Lewis – promised in his election pitch to give more priority to co-operatives, mutuals, and social enterprises. Our report gives him some ideas. Smaller providers struggle to compete with massive private chains. They are better ​‘value for money’ – keeping money flowing locally; delivering higher standards of care – but this can be hard to prove via labyrinthine commissioning processes. Leadership is needed to position smaller care models as a way to do far more than just meet needs – to help skills development, employment and wellbeing agendas right across the region. And local authorities like those in the West Midlands should go out of their way to help new models seed and thrive, with innovation funding and a major push to market careers in care to school and college leavers.

A focus on new models of care could be a win-win in difficult times. To be clear: none of this excuses the need for national Government to put a proper amount of funding into the system. But for pioneering local areas, care could be the engine of a new approach to economic development that starts from the needs of communities, not big investors – and which could provide jobs, skills, wellbeing and of course better care to the heart of the communities perpetually left behind by economic plans.