The rise of the data oligarchs 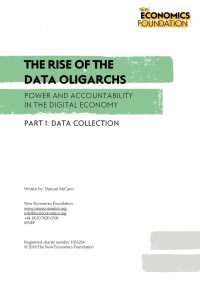 This is the first of four papers exploring power and accountability in the data economy. These will set the stage for future interventions to ensure power becomes more evenly distributed.This paper explores the impact of the mass collection of data, while future papers will examine: the impact of algorithms as they process the data; the companies built on data, that mediate our interface with the digital world; and the labour market dynamics that they are disrupting.

Our research so far has identified a range of overarching themes around how power and accountability is changing as a result of the rise of the digital economy. These can be summarised into four arguments:

The Facebook/​Cambridge Analytica scandal has made data gathering a front-page story in recent months. We have identified four key issues related to data gathering: