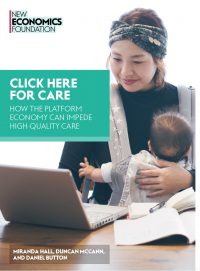 Most of the media and policy attention on gig economy platforms has focused on companies such as Uber and Deliveroo, while those largely represented by women, such as cleaning and caring platforms, get little airtime. Despite the picture that a reference to the gig economy might conjure up, platform work is not just men on wheels.

This paper focuses on the rise of childcare platforms, the impact of those platforms, and what should be done about it.

The rise of childcare platforms

High-quality childcare has a range of benefits for individuals, families, and society as a whole, but it is inaccessible for many. Parents often have to pay several hundreds of pounds per month for care. The way care is organised, via an under-regulated market of private providers, has resulted in a system whereby poor-quality care delivered by a workforce on low pay and poor conditions is the norm. In this context, the last decade has seen the emergence and growth of global corporate nurseries. In addition to expanding geographically, and buying up nurseries, several chain companies are expanding their portfolios into digital services and providing platforms for in-home childcare, which seek to disrupt the childcare market by linking and mediating between parents and carers.

The impact of childcare platforms

Childcare platforms in their current form risk accelerating childcare provision trends over the past ten years by exacerbating poor working conditions and further driving down the quality of care.

The erosion of worker protections enabled by these platforms, through how workers are so often defined as ​‘independent contractors’, is well documented. Likewise, care workers on platforms tend not to be treated as employees, and rates paid tend to be low. This is a problem in its own right, but it also impacts care quality, since wages and working conditions are major predictors of quality in childcare.

Platforms may have a further, negative impact on care quality in that they offer ​‘on-demand’ or ​‘emergency’ backup care by a pool of workers at short notice, despite numerous studies showing the importance of continuity of care. Concerns have also been raised about a lack of effective safeguarding practices.

What should be done?

In our view, it is not platforms per se that are the problem, but the way they are currently configured. Childcare is too important both to families and society to be left to poor-quality private provision. If childcare platforms operated on a different model of ownership, they could play a useful role in the future of childcare. Around the world, co-operative platforms are beginning to emerge, with the potential to expand into the childcare sector.

To curb the negative impacts of childcare platforms in their current guise, we recommend the following set of measures:

Directly funding providers to deliver childcare, expanding the regulatory framework, and increasing the collective power and rights of the workforce would curb a number of the worst impacts of private childcare provision, including private childcare platforms, and create an environment in which the worst offenders would struggle to survive.

To concurrently grow alternative forms of childcare provision, including platforms operating under co-operative principles, several measures could be introduced to support these providers: (1) introduce a worker buy-out option at the point of sale; (2) provide patient forms of capital for alternative forms of provider ownership; and (3) create an umbrella organisation to support innovative models of childcare provision.