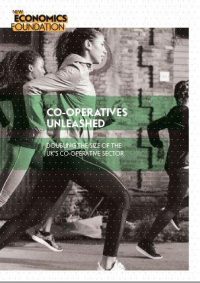 For 40 years, the economy has been a one-way-street. Assets and equity have flowed upwards and outwards, and with them wealth. Margaret Thatcher promised a world ​‘where owning shares is as common as having a car’. But the grand promise of a share-owning democracy, and with it broad-based economic power, has crumbled.

Now, more than half of UK company equity is owned abroad and only just over 12% by individuals. The interests of those who own Britain’s businesses are often misaligned with those of other stakeholders, such as employees, customers, service users and local communities. And even were they are better aligned, a concentration of shareholding and the distant power of capital markets hollows out the agency of individual shareholders.

A different kind of business and, as a result, a different kind of economy is possible, but it will not happen by accident. Co‑operatives are both journey and destination in this quest. They are a vector for democratic change in the economy, and a more democratically-owned economic model that distributes wealth and is viable today. And yet a lack of policy and support, and a hostile economic environment for co-operation in the UK, holds them back.

This report is about doubling the size of the UK’s co‑op sector. It is also about how enterprise can serve the interests of the people it employs and those in the communities around them. And it is about how doing business can increase economic democracy, and how the wealth created can be more broadly and equitably shared.

By most measures, the 40-year-old economic model, ushered in by Margaret Thatcher after her election in 1979, is broken: growth is anaemic; wages and productivity are stagnant or falling; inequality is stark; investment is low; consumer debt is high and crippling; asset bubbles are frequent.

The flaws in the neoliberal model came to a head 10 years ago during the great financial crisis and resulting economic crash. Since then, profound structural changes have been few and far between. Instead the broken economy has lumbered on zombie-like, leading to greater inequality and a growing political tension between a relatively narrow, elite group of winners and those whose living standards have stagnated.

This economic malaise and growing sense of injustice is related to the changing patterns of company ownership and control because who owns enterprise determines how the wealth businesses create is shared. Powerful, distant shareholders have presided over a time when unprecedented levels of wealth created have flowed in their direction while employees and others have experienced a declining share.

In addition, ownership shapes purpose. Creating an economy that addresses the real-world challenges we face, such as an ageing society or climate change, and produces goods and services designed to meet these challenges, is immeasurably more difficult if control lies in the hands of powerful shareholding conglomerates whose habitat is capital markets. The new economy mission becomes more achievable if the power to determine the direction and strategy of business is in the hands of those with an interest in addressing today’s challenges and who live in the communities directly affected.

Co‑operatives are at heart free enterprises. In the countries in which they have thrived, they are often rooted in resistance to oppressive government or the march of a market economy that is prejudiced in favour of an extractive and financialised model. Co‑ops are by nature organisations with a purpose, and are very often established to achieve a specific social or environmental goal by pooling the resources of a defined group of people.

Co‑operatives exist to share risk, power and reward. They are therefore more democratic and accountable forms of business that, again by nature, cannot sell equity on capital markets and so are beyond the influence of the shareholding conglomerates. Recent studies have shown them to be more enduring and resilient in the face of market disruption, more profitable, more productive, happier and longer-lasting than non-co‑operative forms of enterprise.

Doubling the size of co‑operatives in the UK

If co‑operatives are better businesses that can help create a better economy, society and environment, why have they not thrived in the UK? And why have they thrived elsewhere? To achieve the aim of doubling the turnover of the UK co‑operative sector by 2030, we must address these two fundamental questions.

The answer is not one of rocket-science complexity. Our research finds that co‑operatives and the wider cause of democratising and more evenly spreading the benefits of enterprise are held back due to an absence of legislation and policy, institutional support, advice, incentive and promotion. With an economy that does nothing to help co‑ops thrive and everything to create a hostile environment for models of co-operation, it is unsurprising that the UK has one of the smallest sectors of any country.

In those places where there is a more significant co‑operative ecosystem (Italy, France, Canada, USA, Costa Rica), there is also – to varying degrees – a corresponding ecosystem of policy and an institutional architecture that helps develop and shelter the co‑operative economy. In the UK this has not hitherto been the case. However, there are signs of improvement in Wales and Scotland, where non-statutory agencies have been established – at a very modest level of investment – to encourage the uptake of co‑operatives. Though relatively young, they show significant success.

One area of focus in Scotland has been on ​‘business succession’; the moment in the development of an enterprise when an owner or founder seeks to move on, often because of retirement. By promoting more democratic forms of ownership at this moment, Co‑operative Development Scotland has had significant success in moving businesses towards the co‑op model.

New NEF research, published here for the first time, suggests that there are around 120,000 family-run small and medium enterprises in the UK expected to undergo a transfer of ownership in the next three years. If just 5% of these businesses were supported to make the transition to employee ownership or one of the other mutual or co‑operative models available in the UK, then the number of entities in the sector would double.

But doubling the number of co‑ops does not equate to doubling turnover. The UK co‑operative sector currently accounts for roughly 1% of business turnover, but around half of this is achieved by two businesses: the Co‑operative Group and the John Lewis Partnership.

To double turnover requires further effort and almost certainly a cohesive web of legislation, support and promotion. Creating this will in turn almost certainly lead to the development of a co‑operative sector that, perhaps even before 2030, will be more than double its current size. We therefore recommend that the Co‑operative Party, which has commissioned this research and which exists to promote the cause of co-operation in policymaking, sets its sights not only on a doubling of turnover, but also on a profound transformation in business ownership.

Based on the findings of our research, we recommend a cohesive programme of law, policy and institutional arrangements, including a right to own for employees, a Co‑operative Economy Act and a new, statutory Co‑operatives Development Agency for England and Northern Ireland.

We have organised our programme of recommendations into five interlocking steps:

We firmly recommend that all five steps are taken up with gusto by policymakers. It is probable that some form of doubling of UK co‑operatives could be achieved with a more modest programme. But growth in co-operation and the democratisation of business will likely stall unless we transform the hostile economic environment into one that is conducive.

To this end, we also recommend a ​‘heartbeat’ policy we call an Inclusive Ownership Fund, which would either compel or strongly incentivise (or both) all shareholder- or larger privately-owned businesses to deposit a small, annual share of profits in the form of equity into a worker-controlled fund. Over time – like a beating heart in the economy – these funds would reach a tipping point, at which time employees could opt to take various forms of control over the running of the business.

If this sounds radical, then it is only as radical as John Lewis because, in effect, the Inclusive Ownership Fund would create more businesses as employee-owned partnerships sharing the wealth they create and involving employees and other stakeholders in decision making and, in particular, in determining purpose.

Risk but no return

The government puts billions into research and development – so why doesn't it own a stake in the results?