Options for the Chancellor at the coming spending review 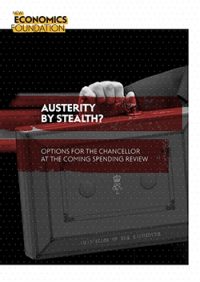 The next 15 months present a critical period for UK fiscal policy. At the 2018 Autumn Budget, the chancellor will announce the amount of money available for government services from 2020 onwards. Over the course of 12 months, up to autumn 2019, the Treasury will then negotiate individual spending plans with each government department – locking in government fiscal decisions, small and large, for up to a four year time period.

The decade of austerity so far has arguably been the worst economic policy error in a generation. As a consequence, living standards have suffered substantially. Office of Budget Responsibility (OBR) analysis suggests that the isolated effects of discretionary cuts have suppressed gross domestic product (GDP) by a cumulative 15% between 2010/​11 and 2017/​18, or £10,000 per household. Furthermore, this damage is unlikely to have been fully, or even largely offset by monetary policy. Interest rates have been near their effective lower bound – a minimum rate below which further reductions have little or no positive effect on spending in the economy – for a decade, while so called ​‘quantitative easing’ is thought to be a less than perfect substitute for lower interest rates. If living standards don’t improve faster than the historical average, then these losses could become permanent.

Public goods and services have borne a particularly severe cost. Local government funding has been cut in half between 2010/​11 and 2017/​18. Schools funding will have fallen by 6.5% per pupil between 2015/​16 and 2019/​20. On average, public sector pay is more than 5% lower today than it was in 2010/​11. Even the NHS, which has been relatively protected, saw its growth in funding constrained to just 1.1% per year between 2009/​10 and 2014/​15 – the slowest period of growth since the 1950s – and coinciding with the slowest increase in life expectancy since the 1970s. Public services are in dire need of a new settlement and a boost in resources to achieve it.

In announcing the overall envelope for the next spending review, the government is therefore presented with a choice.

In announcing the overall envelope for the next spending review, the government is therefore presented with a choice. The first is to roll forward a continuation of the harmful status quo. The second is to show responsibility and flexibility in view of the needs of the economy and society as a whole.

Against this backdrop, this paper, which is the first in a new series of work looking at the future of public service in the 2020s, sets out initial findings. Using NEF’s new departmental spending model, we project forward and simulate a government spending review settlement across three illustrative scenarios – focusing in particular on health, social care and schools funding. These include: a ​‘core’ scenario, projecting forward the most likely government plans at this point in time; a ​‘maintaining standards’ scenario, setting out new funding to prevent a further deterioration in services; and an ​‘improving outcomes’ scenario, which provides additional resources to recover some of the ground lost since the onset of austerity in 2010.

We find that unless the government changes course, the chancellor’s recent claim that there is ​“light at the end of the tunnel” will amount to hollow rhetoric. In June, the government announced a further £20.5 billion for the NHS by 2023/​24. But outside of this increase for the NHS, and despite having endured 10 years of cuts by 2019/​20, overall spending on services is currently on course to see no average increase at all. Furthermore, if government rolls forward its current protections for areas such as police and science, then in the absence of new money this will have to be funded by further cuts to services elsewhere. As a consequence, budgets for things like prisons and colleges could see an average real terms cut of 2.1%, or 4.1% per capita, during the first half of the 2020s.

Unless the government changes course, the chancellor’s recent claim that there is ​“light at the end of the tunnel” will amount to hollow rhetoric.

But reversing this trajectory is entirely possible. Walking out of the government’s ​“tunnel” is a question of choice. We estimate that our illustrative scenario for keeping up with demand pressures in health, social care and schools services would cost an extra £14.6 billion (or 4% of overall resource DEL) per year by 2023/​24 compared to our projection of current government plans. Our illustrative scenario for improving service outcomes beyond this would cost a total of £31.8 billion (10% of resource DEL) in 2023/​24.

Crucially, we show that these illustrative scenarios are realistic and fundable. The current fiscal rules – targets for debt and borrowing – are overly restrictive and consequently harmful to the economy. They focus too heavily on creating fiscal space – room for further borrowing – and not enough on how and when to use it. Nonetheless, even within its own deficit targets, our analysis shows that government has the space to borrow tens of billions more per year, compared to its current plans. Higher progressive taxation could also present a complement or alternative to borrowing. We set out analysis showing a number of options capable of raising significant revenue, targeted at those most able to pay.

But if the chancellor fails to take this opportunity to learn from the lessons of the past, we could be living with the consequences of lost living standards for years, if not decades, to come.