Landing the blame: overfishing in the North East Atlantic 2019 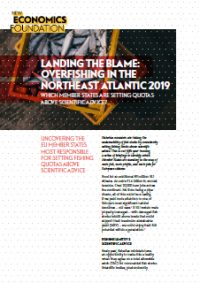 Every year, fisheries ministers have an opportunity to make this a reality when they agree on a total allowable catch (TAC) for commercial fish stocks. Scientific bodies, predominantly the International Council for the Exploration of the Sea (ICES), provide information about the state of most stocks and recommend maximum catch levels. Yet overfishing continues as this scientific advice goes unheeded.

The negotiations over TACs are held by the Agriculture and Fisheries configuration of the EU Council of Ministers. These negotiations are not public, only their outcomes are. This lack of transparency means that ministers are not on the hook when they ignore scientific advice and give priority to short-term interests that risk the health of fish stocks. This briefing, a continuation of the Landing the Blame series, reveals which Member States and ministers are behind decisions that go against the EU’s long-term interests. This conclusion is reached by analysing the outcomes of the negotiations and calculating which Member States end up with TACs above scientific advice. The key assumption is that these Member States are the main drivers of overfishing, either because they have been actively pushing for fishing limits to be set above scientific advice, or they have failed to prevent such limits being put in place. A Freedom of Information Request revealed that the results of the Landing the Blame series closely corresponded with the Member States’ positions heading into the Council negotiations. The results also align with the public positions on particular TACs announced by Member States in the lead up to the negotiations.

During the December 2018 negotiations, ministers set the TACs for the majority of commercial EU fish species for 2019 – a critical moment with significant implications for the livelihoods of European fishers and the sustainable management of the natural resource. This analysis covers 120 TAC decisions made (or confirmed) at this meeting. It shows that where comparable scientific advice was available, 55 TACs were set above advice, amounting to 312,000 tonnes of excess TAC. This is continuing the trend of permitting overfishing in EU waters with Northeast Atlantic TACs set 16% above scientific advice on average – a big increase from the 2018 TACs (9%). The earlier negotiations for the 2019 Baltic and deep sea TACs were also set above scientific advice, with 5 out of 10 and 8 out of 12 TACs exceeding advice, respectively.

For the 2019 Northeast Atlantic TACs, Sweden, the United Kingdom, and Ireland top the league table of Member States with the highest percentage of their TAC in excess of scientific advice (Table 1). These Member States were involved with TAC decisions that allow fishing at 52%, 24%, and 22%, respectively, above scientific advice.

The UK, Denmark, and Ireland are the worst offenders in terms of the total tonnage of TAC set above advice. Ministers representing these Member States have received the largest TAC increases above scientific advice in terms of tonnes and are therefore the most responsible for impeding the transition to sustainable fisheries in the EU.