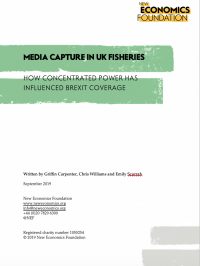 The UK fishing industry is a relatively small economic sector dispersed around the UK coastline. Rarely featured on the front pages, the Brexit referendum has shone a new spotlight on the fishing industry and exposed some of the challenges it faces to the wider public.

But who had their time in the spotlight? Fishing is not one singular business but rather multiple, distinct groups of vessels operating within the broader fishing industry. There are vessels – typically the larger ones – that have fishing quotas allowing them to catch specified quantities of key species. There is also a majority of the fishing fleet (79%) comprised of vessels that do not have their own fishing quota and must fish from a government quota pools, which hold 2% of the UK quota, or target non-quota species like shellfish. This divide in the fishing industry – amongst others – has significant implications for Brexit impacts and future fisheries policy. How trade risks and quota opportunities balance against one another depends significantly on what type of fishing vessel is being considered. This important nuance has been lost in the discussion. Instead, media coverage of Brexit and fisheries has almost exclusively focused on control of UK waters as a means of increasing UK holdings of quota to benefit fishers who can access this potential quota gain.

To explore this singular focus in the media coverage of Brexit and fisheries, we use the LexisNexis media search tool to record how often different fishers and fishing organisations have appeared in news articles on Brexit and fisheries since 2016. This text analysis reveals that of the 12,000 fishers and their representatives in the UK, the most cited individual – Bertie Armstrong – received 48% of the total coverage and the three most cited individuals received a combined 66%.

Bertie Armstrong, who popularised the ​‘sea of opportunity’ pro-Brexit catchphrase, is Chief Executive of the Scottish Fishermen’s Federation (SFF). The SFF tends to represent larger vessels in Scotland, which in turn tend to be those vessels with quota. Replicating the analysis by organisation, we find that the SFF received 49% of the total coverage and the top three organisations 85%, while organisations specifically representing the small-scale fleet received only 2% of the media coverage.

A high concentration of media coverage on a small number of voices is especially problematic if these voices are not representative. To explore whether there are uniform views on Brexit policy issues, we analyse the policy positions of different fishers and fishing organisations. On the issues of Brexit opportunities, tariffs on seafood, non-tariff barriers to trade, and quota distribution within the UK, we find evidence that fishers and fishing organisations that receive much less media coverage tend to take a different (and often polar opposite) view to the SFF. With a heavy focus on only one perspective, the spotlight of media coverage has presented a picture that excludes the less homogenous views of many fishers. This is particularly the case for small-scale fishing vessels that make up 79% of the UK fishing fleet. These fishers mostly target shellfish as they do not hold quota and export a significant portion of their catch. For these fishers, any quota they can access would not offset the damage to seafood trade.

Exploring media coverage of these Brexit policy differences, we find that the dominant narrative of quota gains from Brexit has crowded out other Brexit impacts from media coverage. This includes the critical trade issues of tariff and non-tariff barriers, which will affect many of the smaller scale fishers, as well as the significant risk that overfishing could increase post-Brexit, as the UK intends to fish more, and EU members do not intend to fish less.

A lack of awareness in the media about the complexities of fisheries combined with the unequal power of groups within the industry has led to a small number of voices becoming dominant. In turn, this dominance has allowed these individuals to tell one particular narrative that benefits the parts of the industry and the types of vessels they represent. As the UK embarks on a new policy framework for fisheries management post-Brexit, this ​‘media capture’ by individual actors risks creating an environment in which one set of interests is prejudiced over another.

Policymakers need to understand these complex differences regarding needs and interests, as these will play a role in the future shape of the fishing industry. Not only is current media coverage providing a simplified presentation of Brexit and fisheries, its presentation is being shaped by a small number of voices with particular interests. For UK fisheries to have a fair and sustainable future post-Brexit, media outlets should cast a wider net to hear from the great diversity of voices across UK fishing communities.