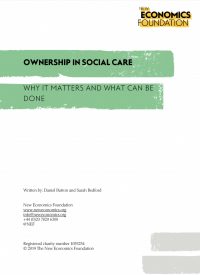 Adult social care has received extensive press coverage in recent years due to failures to treat people with dignity and to meet their needs. High-profile reports like those from Panorama reveal a service far from fulfilling its mission to support people to lead the life they want, regardless of age or disability.

Much of the debate has focused on the need for more investment in social care. After a decade of cuts to local government funding, the care system is under huge pressure. It now seems that, despite a series of delays to the publication of a green paper intended to address this issue, there may be more political will to pay for care. Boris Johnson claimed in his first speech as prime minister that his government will ​“fix the crisis in social care once and for all”. After the December 2019 election, the prime minister pledged to provide a plan for solving social care within a year and introduce changes by 2025.

As well as improving access to social care, more public investment – if accompanied by the right set of policies – could put real momentum behind efforts that are already being made by some local authorities to address entrenched problems within social care provision. With services almost entirely outsourced, there is a long-term trend towards an increased role in the provision of domiciliary and residential care from chain companies with an ownership model that concentrates power among shareholders. A change in direction is imperative, as social care – already a major sector of the economy – is set to grow. The Personal Social Services Research Unit projects that the number of younger adults needing support in England will rise by 32% by 2030, while the number of older adults needing support will rise by 41% by the same year. Just to maintain current entitlements to care will require between 450,000 and 750,000 new jobs. The choice facing policymakers, both local and national, is whether to let services continue to develop in a way that is extractive, drives inequality through low-paid, insecure jobs, and puts downward pressure on the quality of care, or to intervene.

This short paper focuses on the issue of ownership in social care. Drawing on analyses by the Centre for Health in the Public Interest (CHPI) and the Centre for Research on Socio-Cultural Change (CRESC) at the University of Manchester, among others, we outline patterns of ownership in social care and set out why ownership matters. Rather than reinforcing a top-down model of private ownership, we argue that any new money for social care should be used to support new forms of democratic ownership that shift power to care workers and, above all, to people needing support, their families and communities. Short-termist, cost-driven, competitive tendering should be scrapped and replaced by public-social partnerships, where the local state collaborates with socially-driven, not-for-profit organisations. Shaping service provision and its relationship to the state in this way has the potential to drive improvements in care quality through refocusing on a core purpose of supporting people to lead the life they want. It can also help to provide better jobs for a growing workforce, to increase the resilience of local economies, and to build more connected, resourceful and powerful communities.