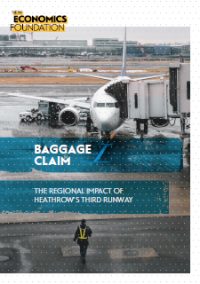 The decision taken by the UK parliament to approve plans to build an additional runway at Heathrow airport is of international and historic significance. The expected additional carbon emissions of at least three million tonnes per year are equivalent to the footprint of a small country, and threaten to throw fuel on the fires of the climate emergency. At the same time, the UK faces a crisis of social and economic inequality, characterised by the stark differences in life opportunities between the UK’s regions.

In Flying Low, NEF’s last report focussing on the proposed expansion of Heathrow, NEF dissected the economic modelling conducted by various statutory bodies in the lead-up to the decision. We showed that, even using the government’s own criteria for infrastructure appraisal, the proposed investment in Heathrow represents a poor deal for the UK as a whole. Our calculations suggested that – applying the usual HM Treasury scores to the proposed North West Runway (NWR) – it would be judged ​‘low’ or even ​‘poor’ value for money and would not be recommended for approval.

In this report we go further, focussing on the distribution of the expected impacts of the scheme to answer the question who pays?

Heathrow is likely to be heavily publicly subsidised

Throughout the process of gaining consent, Heathrow Airport Holdings Ltd (HAL), formerly BAA, has promised that it will finance the majority of the costs of construction privately. However, the public will subsidise Heathrow expansion in three key ways.

The first is through providing ​‘surface access’ to enable more passengers to get to and from the airport. Transport for London has estimated this will cost around £10bn, but has also said that it has not conducted a detailed assessment. If added to the project cost-benefit analysis, this would push the whole scheme deep into negative territory. By comparison, essential transport projects could represent much better value for money –for example diverting the Great Western Railway around its threatened coastline route in Devon at around £500mn or the electrification of east-west rail links in the north of England at around £2bn.

The second is through a complex subsidy regime called the Regulatory Asset Base (RAB) provided by the government to help mitigate the risks of large infrastructure projects. This could see ticket prices rise to compensate for the expansion of the infrastructure at the airport, even though Heathrow is already the world’s most expensive airport for airlines to use and its owners have told policymakers that charges would not increase.

The third is in terms of the cost of the additional carbon an expanded Heathrow will emit – there is already a cost associated with emitting CO2 and with the UK’s new ​‘net zero’ targets the capacity for sectors of the economy to emit is growing ever smaller and therefore the costs of emitting higher. Allowing more aviation emissions into this environment represents a ​‘carbon subsidy’ which, using conservative government data for the future price of carbon, is estimated to be worth around £19bn in net present value.

Perhaps the most concerning aspect of our analysis on the net public subsidy was how difficult it proved to calculate. Very little work appears to have been done by the relevant public agencies to understand and aggregate the different costs the UK public will incur. Spending on transport infrastructure in London outstrips that in any other regions of England by a factor of 4:1 and the supply of government capital for infrastructure is finite. It is reasonable, therefore, to assume that there will be an opportunity cost to the public subsidisation of Heathrow expansion that is likely to be felt outside of London and the south east.

The regional economic and carbon costs of Heathrow

The public subsidy and its probable opportunity costs to the UK’s regions and nations is only the tip of the iceberg. This report also shows how the scheme’s effects will be felt over and above the explicit costs to the public purse.

Using a combination of our own analysis of official Department for Transport (DfT) modelling, and new data accessed via three Freedom of Information (FOI) requests, we have examined the impact of expanding London’s largest airport through a NWR on the UK’s other regions and nations.

Our results should provide policymakers – especially those located outside London and the south east of England – with cause to re-examine their thinking if they have supported or voted in favour of Heathrow expansion, and reason to redouble their efforts to question Parliament’s decision if they have not.

Mobilising the DfT’s data and the additional insights we have been able to gain through FOIs, we find evidence of a significant ​‘Heathrow effect’, which has the potential to inflict serious damage on economies outside of London and the south east. Our analysis is presented in two layers.

1. The economic impacts on the UK’s nations and regions

First using DfT’s aviation forecasts, our analysis finds that if Heathrow is expanded, then by 2050, 17 million fewer passengers will be departing from non-London airports compared to the forecasts without Heathrow expansion.

In this case, using DfT data accessed via one of our FOIs and analysed by NEF, we find that this could result in up to 27,000 jobs relocating from the UK’s wider regions to London and the south east. We estimate that around half of these are jobs not directly associated with the aviation sector.

The forecast movement of jobs will also impact on the national distribution of GDP. Our further analysis suggests that, over the appraised lifetime of a Heathrow third runway, around £43bn in net present value (NPV) would move out of the wider regions and into London and the south east when compared to the aviation sector scenario without
Heathrow expansion.

The worst-hit region is likely to be north west England, which according to our analysis would lose 5 million passengers and as many as 15,000 jobs by 2050. In the context of the stark regional imbalances in the UK economy – some of the most pronounced spatial inequalities in the industrialised world – this negative ​‘Heathrow expansion effect’ should be cause for significant concern.

2. The impact of carbon constraint on the UK’s regions and nations

In our second layer of analysis we look at the effects that managing aviation demand to curb its carbon emissions could have on the sector as a whole and how this might play out between regions and nations.

Aviation is not currently capped in terms of its carbon emissions, but as the UK economy as a whole is covered by a legally binding cap, future profligacy in the aviation sector will further constrain the possibility of emissions in other sectors. Using the data we have extracted from the DfT through FOI requests, we have attempted to analyse how this may play out.

The DfT’s own forecasts show aviation is already likely to overshoot the levels of growth the Committee on Climate Change (CCC), the government’s official carbon watchdog, suggest is viable within the wider economy. With Heathrow expansion, UK aviation would be on course to overshoot the maximum level of growth in demand that the CCC suggests is possible by 2050 by more than 50% (i.e. from 60% compared to 2005 levels to 93%). Under the UK’s cap, from where would these emissions come?

Even without any more measures to further curb aviation emissions, we find that expansion at Heathrow would effectively transfer £3.3bn worth of emissions out of other regions and nations of the UK and into London between 2030 and 2050. This ​‘carbon subsidy’, paid by some of the poorest regions of the UK to its richest, would penalise non-London aviation or other sectors of the economy.

Aviation is not the only sector that represents a significant decarbonisation challenge. Expanding Heathrow would introduce an additional three to four million tonnes of carbon dioxide equivalent (MtCO2e) into the economy, which would be enough to sustain up to 100,000 jobs in manufacturing, or 50,000 jobs in transport and storage (using 2017 levels of carbon intensity per job in those sectors).

A more progressive approach to curbing aviation demand, such as that proposed in the NEF-designed ​‘Frequent Flyer Levy’, would see emissions at airports in London and the south east targeted in order to allow more passengers to use regional airports for longer. This would redress the negative carbon subsidy that otherwise flows from the regions to London, but since the strategic case for Heathrow is based on growth in passenger numbers, it would therefore render expansion pointless; why build a new runway to carry more passengers only to curb their number?