The government announced earlier this week that it will scrap Public Health England (PHE) and replace it with a new agency – the National Institute for Health Protection – charged with protecting the country from pandemics.

The logic, on the face of it, is to merge the pandemic response remit that currently sits within PHE with the NHS Test and Trace System under one new body. However, some have labelled the move an exercise in blame shifting for the government’s poor coronavirus record, aiming to divert attention from Westminster. Others have suggested the move is about taking political control of public health: the new institute will be headed by Dido Harding, the Conservative peer in charge of the government’s disastrous centralised, outsourced test-and-trace system.

Hastily reorganising the health system in this way, in the middle of a pandemic, is highly risky. But the impact of this reorganisation goes beyond the dangers posed by coronavirus. Effective public health systems are about much more than protection from pandemics, and PHE has a range of essential functions that will be seemingly lost in the move to the new agency. Perhaps most worryingly, it is unclear what will happen to PHE’s role in promoting health and reducing health inequalities.

Health inequalities are stubbornly high in the UK, and have been increasing in recent years with life expectancy in some areas even starting to decline. The experiences of BAME groups and those living in the most deprived areas during coronavirus – who have been dying disproportionately – has brought these health inequalities to the fore and increased public appetite to do something about them. This increased focus on the unequal health impacts of the virus led some to wonder whether Covid-19 will provide a ​‘watershed moment for health inequalities’ after decades of government inaction, but the government’s decision to seemingly abandon PHE’s crucial role in this area is not promising.

When pressed, the health secretary, Matt Hancock, did commit to embed health inequality reduction across government. This is an important commitment. As research has concluded for many years now, our health is determined – more than anything else – by our social, economic and environmental conditions, from the quality of our housing and employment to our level of income and access to green space. Effective action to tackle health inequalities must focus on these wider determinants of health, and one department cannot act on all of these factors by itself – it requires action across the board. However, without a body with a dedicated duty to reduce health inequality, the expertise to guide action, and the independence and power to hold the government to account, health inequalities are likely to fall through the cracks. PHE might currently lack this power, but cutting this function altogether is not going to help with that.

There has been a suggestion that some PHE health promotion work could be handed to local councils and family doctors. While local public health teams can and should play a vital role in supporting efforts to reduce inequalities, the government has for years pursued a policy of cutting local public health budgets to the bone, severely undermining their capacity to do this.

Scrapping the national body after defunding local public health teams in this way risks killing off health promotion-focused public health at a time when public pressure for this sort of action is increasing. The answer, surely, is not for the government to rid itself of an organisation charged with reducing health inequalities, but to give the public health system – both nationally and locally – the freedom, power and resources that it currently lacks to speak up for and guide action on reducing health inequalities. 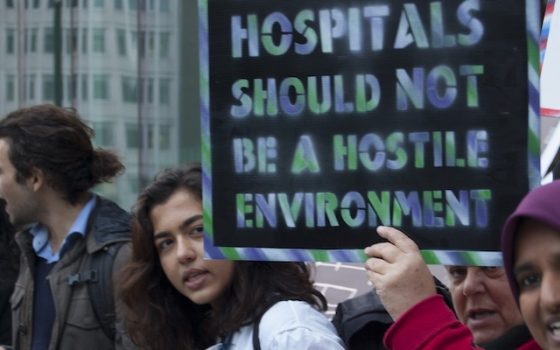 How Hostile Environment policies impact the health of BAME and migrant communities.

We can't settle for awareness without proper mental health funding for prevention and treatment.