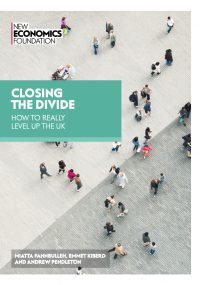 Long-standing inequality between and within regions is holding back millions of households and acting as a drag on economic prosperity. The UK government is therefore right to establish levelling up as its primary mission alongside the transition to net zero.

To date, however, the government has yet to define precisely what it means by levelling up and how it would do it. Against the backdrop of over a decade of squeezed living standards, the goal of levelling up should be quite simple: to lift living standards, particularly in communities that have faced decades of deprivation and neglect. This task is not simply about tackling inequality between regions but also within regions. The challenge of levelling up is as real in Barking & Dagenham or Hackney as it is in Barrow, Darlington, or Barnsley.

To deliver on this goal, it is simply not enough to invest in places independently of the people who currently live there. Forced gentrification may improve many of the metrics of levelling up in a given area, but it but it pushes poorer families to move around the country to find housing and work.

The policy response required to meet this challenge will be immense. But the first step is being clear about where the greatest levelling up need is across the country. While there are many ways to measure the levelling up need, we conclude that there are three key drivers of this need: the strength of local economies, household incomes, and the social infrastructure in a place. Combining the three indicators allows us to identify two groups of areas with a high levelling up need: places that are caught in a low-productivity, low-income trap with poor social infrastructure (ie held back), and places that have comparatively high productivity but low levels of household incomes and weak social infrastructure (ie disconnected growth).

To improve living standards in communities, the old policy prescription of investing disproportionately in physical infrastructure and attracting high-value-added firms to simply boost growth within a locality will have to be rethought. Improved productivity and overall prosperity may be one way to sustain strong local economies. But the way this is done matters, and the indication from some places is that boosting growth alone is unlikely to drive up the living standards of people in these places. Put simply, targeting growth and productivity cannot be the primary aim of levelling up.

Delivering improvements in the living standards of people in places will require five major shifts in the old local economic development model. First, a shift away from central direction to local power and control. This should be underpinned by a radical shift of powers over economic and social policy from Whitehall to town halls combined with strong local plans and the open participation of communities and local businesses in economic decision-making.

Second, a shift in focus from growth to living standards. Boosting disposable incomes and access to social infrastructure will have an immediate impact on people’s living standards. It will also help to stimulate local economies by increasing demand and improving labour supply, which will provide more confidence for firms to invest.

Third, a shift in focus from high-value-added sectors to the everyday economy that forms the backbone of local economies and generates the majority of jobs. Improving productivity, wages, and job creation in these foundational sectors will have a direct impact on the prospect of communities that have struggled to attract high-wage, high-productivity firms.

Fourth, a shift in focus from large businesses to the small and medium enterprises (SMEs) that form the bedrock of local economies. The vital role of SMEs in local economies is often overlooked despite their accounting for more than half of all private sector jobs. Support for SMEs through access to affordable rents, finance, and tailored business advice will be key to strengthening local economies and creating jobs.

Fifth, a major shift to green. Without a concerted effort to link levelling up to net zero, this could result in the derailment of both agendas. From the point of view of levelling up, improvement in living standards will be only short-lived if is it built on the back of energy-intensive industry that is likely to be stranded within a decade. The scale of investment that will be required to deliver net zero also creates a unique opportunity to invest in our communities to create jobs, boost industries, and remake places.

There is no silver bullet to a problem that is as complex and as difficult as closing the divide between people and places. But without a major shift in policy, levelling up will continue to elude this government.