Operating previously unnoticed behind the scenes of the global economy is a group of pallid professionals.

In recent years, their role has expanded from checking the company books, to advising on everything from filing taxes, to managing their employees, and swallowing up competitors.

Who are they? The accountants, and they are far from the retiring bean-counters of popular myth.

Spearheading the rise of the accountant has been a core of mega-firms, the Five Brothers of Andersen, Deloitte Touche Tohmatsu, Ernst & Young, KPMG and PricewaterhouseCoopers. Together they audit all the FTSE 100 top companies, and many more besides. They employ over half a million people and generate $65 billion in revenue.

No longer restricted to the remit of auditors, these ​‘professional services’ companies quietly exert a staggering influence over the business world. They also create and nurture the managerial culture that permeates corporate globalisation. At least in theory, they hang the principles of efficiency, competitiveness and fiscal rectitude like the Sword of Damocles over even the largest global companies.

But their rise to prominence may have uninvited consequences. Already the focus of regulators, the anti-globalisation movement might be next. Popular protest against multinational corporations that are household names could move on, up the food chain of finance and corporate led globalisation, to the powers behind the company thrones – the Five Brothers. 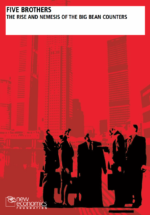