A 10 point plan for a more positive local legacy

The 2012 London Olympics have been presented by the Government and the Olympic delivery bodies as a once-in-a-lifetime opportunity to help regenerate one of the UK’s most economically disadvantaged areas, London’s Lower Lea Valley.

But previous Olympics and other ​‘flagship’ UK regeneration projects, whilst boosting international tourism, transport, leisure and telecommunications infrastructure, have failed to improve the lives of the poorest people in host cities.

As signs of a growing global economic storm gather, with London likely to be particularly badly hit, Fool’s Gold, a new report from nefand Community Links, funded by the East Foundation, shows that it will be even more important to put in place mechanisms that will guarantee a positive legacy from the games for some of London’s most disadvantaged communities.

Fool’s Gold, identifies the ​‘trickle down’ economics that underly the approach to regeneration at the heart of the Olympic bid as the root cause of the problem. This assumes that investment flowing into deprived areas will stay put. In practice, as nef research has shown, it leaks out to consultants, developers and large companies which are best able to exploit new commercial opportunities.

Small local enterprises are unable to compete and local people who don’t own their own homes are priced out of the housing market because gentrification inflates the cost of living well above their income levels.

Fool’s Gold sets out a ten-point rescue plan, which, if acted on, could help to ensure that East London isn’t trampled in the Olympic gold rush. 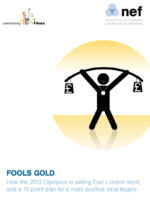