How locking up children is making Britain less safe

Locking up children and young people for non-violent offences is costing the taxpayer millions, while doing little to reduce the amount of crime.

This report presents new results on the full cost to society of the use prisons. It outlines a policy to change the pattern of public spending for a safer and more inclusive society.

Providing a prison bed in a Young Offender Institution costs about £100,000 per year. While these expenses are overwhelming, the results of Punishing Costs suggest that the long-term costs are even higher. Children that have gone through prison are more likely to be unemployed, to live in poverty and have unstable living conditions. They are also more likely to return to offending – making the overall reduction in crime created by prison very small.

Despite the high costs and damaging consequences, Britain imprisons more under-aged children than almost all other Western European countries. Currently many children who are not a threat to public safety are put behind bars.

What makes the high levels of imprisonment even more of a tragedy are the other opportunities where the same public resources could have been used. A large part of the hundreds of millions of pounds invested in prisons for young people could be used in a more humane and effective way to deal with young offenders in the community, or to improve disadvantaged areas to reduce crime. We are locked into a vicious cycle in which a large proportion of the resources we spend on children do little more than isolate them from positive contact with society and entrench criminal behaviour.

This report shows how the number of young people and children in prison could be drastically reduced. It outlines a policy that would channel the resources currently spent on prison to local authorities, allowing them to improve their neighbourhoods and to deal with crime in a more constructive way locally. 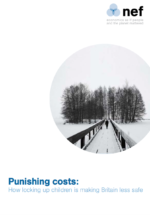