Universities yield benefits way beyond the individual financial returns to students and human capital gains for the economy.

We find that just three social outcomes – greater political interest, higher interpersonal trust and better health – contribute a benefit of £1.31 billion to UK society over and above the economic benefits.

University performance is often evaluated according to a limited set of indicators, namely financial returns to individuals and impact on economic growth. Such narrow valuations ignore the role universities play in building a stronger and more tolerant society – both directly through public outreach and indirectly through the student university experience. Where attention has been paid to the broader outcomes the lack of quantitative evidence has led to an assumption that their value to society is marginal.

This report aims to challenge this assumption. Using principles based on the Social Return on Investment (SROI) methodology, it finds monetary values for three UK-wide societal outcomes: greater political interest, higher interpersonal trust and better health, alongside a number of community outcomes derived from community outreach activities at two universities, Manchester Metropolitan University (MMU) and the University of Warwick (UW).

This research has attempted to quantify public value in a way previously not thought possible, however, it does not give a full account of all the broader benefits produced. For example, it does not quantify the vital contribution of scientific research on issues such as combating climate change and diseases such as cancer. Instead, it is an initial attempt to evoke discussion about the broader public contributions from the diverse ways in which everyone profits from the university sector in the UK.

The key monetary values relate to:

1. Societal benefits from individual social outcomes: The public value generated from just three society-wide outcomes – greater political interest, higher interpersonal trust and better health – amount to £212 million from the 1.9 million current undergraduate students and a total of £1.31 billion for all 11.8 million graduates in the UK.

2. Facilitating social mobility: At MMU the principal public benefit is created by having higher than average levels of students from low-income households. Through this one activity MMU contributes £147.2 million to society a year.

The above valuations are for just two universities and an isolated number of community engagement programmes. Thus, it is fair to assume that the university sector as a whole is delivering benefits through facilitating social mobility, community engagement and cultural enrichment to the value of billions of pounds every year.

Our findings demonstrate the significant contribution universities can make in strengthening the glue that holds society together, providing cultural facilities and raising the aspirations of children and young people. As such, higher education impacts on wider policy objectives including those related to health, citizenship, community cohesion, social mobility and the ​‘Big Society’.

Based on our findings we recommend that:

1. Universities should seek to maximise their public value and impact.For example, by making the most of activities such as student volunteering, opening up cultural facilities, and bringing together individuals from a variety of ethnic and socio-economic backgrounds.

2. Universities become more vocal about the public value they deliver. This will require a sector-wide adoption of common methods and language to capture, value and communicate the broader outcomes they produce. Collating such figures should ensure a much better understanding by the Government and the public on the broader benefits universities contribute to society. 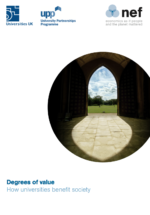