The criminal courts of England and Wales do a tough job, ensuring the rights of citizens are protected and that the guilty are sentenced.

But they are often seen as conservative institutions, reluctant to embrace change unless it comes from central government.

Away from Westminster and Whitehall, however, some courts are using their own initiative to find ways to cut costs, speed up court cases and reduce re-offending –in many cases without additional funding. Encouraging and learning from these innovations will be key to meeting the significant challenges faced by our justice system in 2013 and beyond.

Having reviewed the evidence base on court innovation, and conducted in depth studies of a number of innovative courts in action, we identify examples of courts that are:

Our case studies demonstrate it is possible for courts in England and Wales to innovate to improve the way they do their job. Underpinning the most effective court innovations we have studied are four basic principles:

But examples of court innovation are still too few and too far between. A range of practical and structural challenges stand in the way of widespread court innovation. For example, would-be court innovators currently have difficulty identifying which innovations to trial, and monitoring and evaluating innovations once they are in place. This is aggravated by a general lack of practice sharing between court practitioners and programmes. Court managers and other key agents often lack the autonomy or opportunity to pursue local innovation or influence the decisions occurring around them in the justice system. Some potential innovations (such as sentencer supervision programmes) are barred by legal and operational constraints.

Overcoming these obstacles will, in part, require action at the national level. The Government should consider how best to reform the governance of courts in order to deepen local discretion and judicial empowerment. We recommend:

a. Giving court administrators and sentencer representatives a role in approving and monitoring the new prison and probation contracts;

b. Revisiting s178 of the Criminal Justice Act in order to remove the legal obstacle that currently bars courts from reviewing community orders.

a. Diverting simple summary cases to more proportionate ways of dealing with them, such as Neighbourhood Justice Panels

b. New ​‘procedural justice’ training for magistrates, ensuring a higher quality of communication between the court and victims, witnesses and defendants

c. Improving the information provided to sentencers about defendants and the services available in their communities to support them to desist from crime;

d. Extending and strengthening the use of sentencer supervision.

To support these efforts, the Centre for Justice Innovation and nef plan to provide technical support to practitioners. We will also explore the evidence around particular innovations such as sentencer supervision to help providers understand what has been shown to work and in what contexts.

We believe that innovation can make our courts better: faster, more efficient and more effective at reducing crime. But the only people who can drive this improvement are court innovators working at ground level – for it is our courts themselves which should be engines of change. Only then will they, and the justice system, become better. 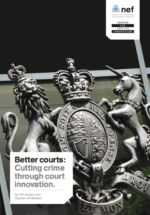